Everything You Need to Know about Damaged SD Card Recovery

Modern electronic devices rely on SD cards — either regular or micro — to store files, just like you rely on your smartphone, digital camera, or portable audio player to get you through the day. If only engineers knew ahead how ubiquitous SD cards would become, they would probably make them slightly more robust. 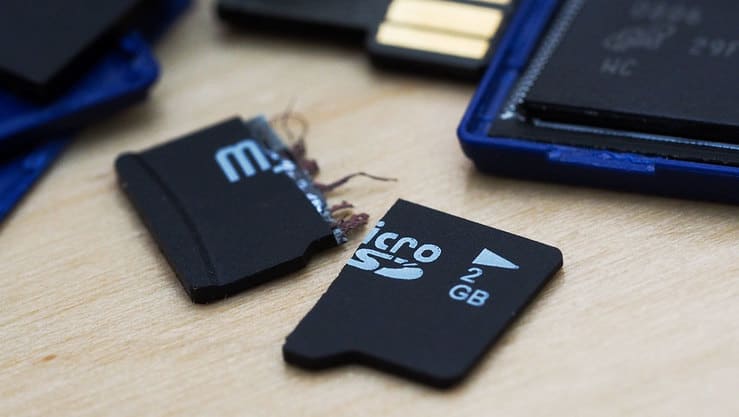 Full-sized SD cards, in particular, are known for being very fragile, with the flimsy plastic case often breaking open, leaving you with an exposed chip and no way how to get data from it.

MicroSD cards are a lot better in this regard, but they’re far from perfect. Unlike with regular SD cards, there’s not much else beyond the storage chip itself on a microSD card. So, if you manage to bend it, twist it, or split it into two pieces, the only thing you can really do with the card is throw it away.

You are supposed to insert your MicroSD card into your device and leave it there. Neither the card nor the slot are designed for frequent swapping, which is the most common source of SD card damage. You can usually tell that your card is starting to go bad because your device won’t recognize it. Initially, this will be a rare occurrence, but give it more time and the card won’t be recognized at all.

Another two sources of problems with SD cards and other storage devices are data damage and accidental file deletion. Both tend to happen when people use a single card for multiple devices. For example, you have an SD card that you use on a daily basis with your smartphone, but you occasionally use it with your DSLR camera. However, the camera writes data in a slightly different way than your smartphone, resulting in damaging and potential loss of important pictures, documents, and other types of data.

Your operating system may then see the damaged card as empty and format it. That’s bad news for anyone who’s not familiar with data recovery programs. Without a good data recovery solution capable of restoring files from damaged SD cards, hard drives, and smartphones, you won’t be able to get your data back.

Disk Drill allows even inexperienced Windows and Mac OS X users to restore virtually all file formats from all major storage devices in a few minutes. What would otherwise require the attention of a professional data recovery company can now be done from the comfort of your home and for a small fraction of the price.

Disk Drill has been used by over half a million of professional clients from more than 150 countries, and the company behind it actively works on making it even better with each update they release.

The latest version of Disk Drill for Mac can even restore data from Android and iOS devices, including your messages, call history, contacts, and more.