With rapid advances in computer technology and an increased demand for safe, secure and reliable data storage, RAID technology has become a well recognized file storage solution. RAID is an abbreviation for Redundant Array of Inexpensive disks. 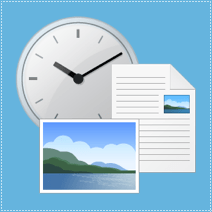 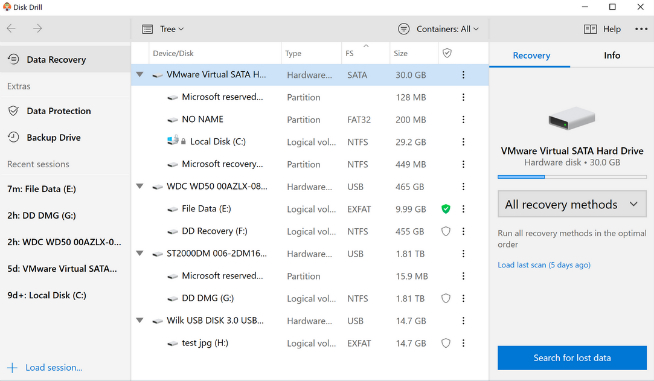 RAID is a technology that achieves more storage capacity at high speeds, redundancy and fault tolerance by combining multiple hard drives and treating them as a single logical storage unit. Fault tolerance implies the ability of a system to continue functioning as expected even when one or more hard drives fail or otherwise develop an error (fault). Data is copied across multiple hard drives and in the event of a disk failure data loss is avoided. Furthermore, with more hard drives combined the overall system benefits from increased efficiency and heightened performance.

RAID was originally developed for servers to create large storage at lower costs and quickly became popular for hobbyists and home users for many reasons including personal DIY cloud storage and at home media centers.

There are several types of RAID arrays and each configuration has distinct pros and cons. The type of RAID array also drastically affects the potential outcome of data recovery and the probability of file recovery success. Let’s talk about the different RAID types to better understand. These are the common RAID types: RAID 0, RAID 1, RAID 5 and RAID 10 (Combination of RAID 1 and RAID 0).

This is also known as a stripe set or striped volume. It's tailored for those seeking high capacities and faster performance. Usually RAID 0 is not recommended for those seeking data security due to its lack of redundancy. As such, it not considered a ‘true’ RAID. It combines two hard drives preferably of identical size and speed to form a single logical volume. This makes it score highly on capacity because the resulting logical “hard drive” achieves twice the capacity. Once installed, data is written across both hard disks simultaneously, thereby doubling movement of data into the storage. In a RAID 0 configuration you are able to fully utilize the capacity of both hard drives. If you are using two 4TB drives, the system only sees one drive with 8TB of space. RAID 0 greatest undoing is that it cannot provide fault tolerance or redundancy. If one hard drive suffers failure or gets corrupted the overall data in its complete state is lost. 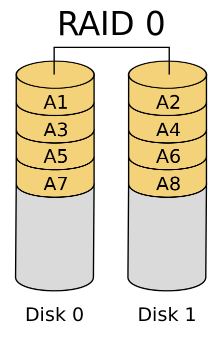 Failed RAID 0 arrays can be recovered at an individual drive level. Data may be incomplete or only possible in smaller segments or files. Data can only be recovered from the remaining live disk(s). In the event the data loss is due to a RAID controller failure or RAID configuration loss but not a disk failure then the chance of recovery is far better.

Also known as mirroring, this is the first ‘true’ level of RAID and it achieves redundancy and data security by continuously replicating or cloning data across two hard drives in a way that creates a complete backup down to the last bit of data. All data is simultaneously copied to each drive which means the likelihood of data loss is much less. The two drives are cloned, if one drive fails or deteriorates, the other has a complete replica of the data and it can be retrieved or even swapped into service immediately without moving the data. Adding more hard drives will not add more capacity only more redundancy. Unfortunately when it comes to capacity, you can only use half of the capacity available as the other drive is used for replication of data. 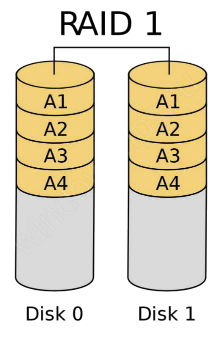 In the event of a single disk failure the chances are very good. The disk can usually be swapped back into service easily with minimal effort. Very small amounts of data loss could theoretically occur if data was not entirely written to all disks and a mechanical failure occurred however this is unlikely.

In the event of a multi-disk failure the recovery chances are reduced but may still remain good if the disks were not adjacent in the array. Failures due to other non disk related issues such as controller failure or configuration loss leave great recovery possibilities for RAID 1 arrays.

How to Recover Deleted or Lost Partition

This is the most popular RAID type. It’s much more effective in achieving optimal capacity and redundancy. RAID 5 encompasses block level striping with distributed parity. It consists of a system of checksums called parity. If one drive fails subsequent reads can be calculated from the distributed parity in other drives and therefore no data is lost. RAID 5 requires at least 4 drives to achieve its ideal capacity and performance. A single hard drive collects the parity data. In the event that a drive fails, the RAID can be rebuilt and all data recovered. All you must do is add another hard drive to complete the array and begin restoration. The process may take quite some time but is considered a safer option in terms of redundancy and capacity. 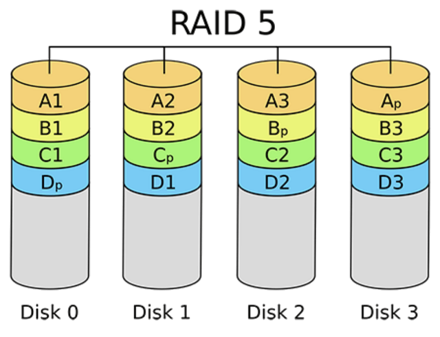 RAID is not a substitution for backup. A critical event can happen anytime which damages the array or multiple drives. Even with redundancy you are still prone to viruses, accidental deletion, mechanical damage or human error. It’s prudent to always ensure you have a proper backup for your data.

If multiple disks have failed data recovery is still possible on the remaining live disks outside of the RAID array. It is also possible to replace the damaged drive and recover with the core RAID functionality. This type of RAID array can be recovered easily if the damage is not related to disk failure but rather controller failure, etc.

This type of RAID array combines the pros of both RAID 1 and RAID 0. Basically, it combines increased capacity and fault tolerance into a single solution. You achieve double the performance and capacity. It’s great when performance and space are concerns while maintaining a budget. 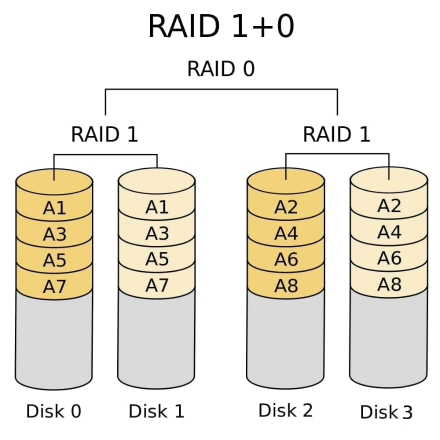 The recovery probability of a RAID 10 array (RAID 1+0 or RAID 0+1) is on-par with that of RAID 1 and RAID 0 arrays. Generally recovery chances are quite good although the overall health of the remaining disks and the number of failed disks in the array plays a large role in the likelihood of successful file recovery.

RAID systems are generally considered a reliable and safe option for managing and accessing data. However, occasionally they are susceptible to failure just as other hardware devices and this may lead to catastrophic loss of data. The consequences are much more severe if important files were not previously backed up. Remember that RAID is not an alternative for backup and even the most secure RAID array configurations can still fail. With this in mind, it’s imperative to continuously backup your data. RAID may fail due to several reasons, a few of which include:

What to do when you suffer RAID failure?

So now that you’ve suffered a RAID failure, what are the next steps to take? You’ll need to attempt RAID recovery to get back your data. Generally the safest step at this point is to stop using the array and assess the severity of the damage to your RAID array. While it is generally recommended that you repair and replace the array as needed, recovery may also be an option.

There are several solutions which may help you recover RAID data. There are multiple Windows tools for RAID which can help enable you to recover RAID 0 data that has become corrupted or lost.

What is RAID recovery

RAID data recovery, as the name suggests, refers to retrieving or recovering your data from RAID arrays in case of RAID failure. Below we discuss some options for each RAID array recovery strategy using the internal mechanisms.

RAID 0 data recovery can be achieved through the following approaches: 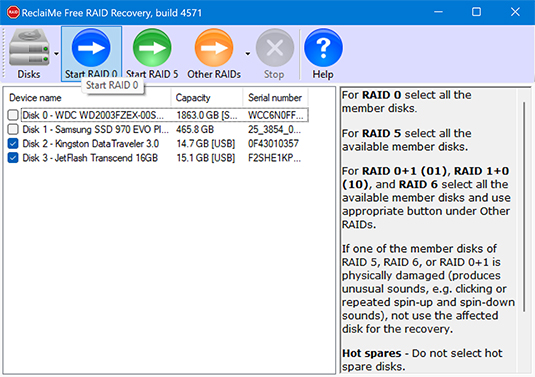 A popular free RAID 0 data recovery tool that is used for Windows 7/8/10/11 is ReclaiMe Free RAID. This free tool can be downloaded for Windows from their website.

Sometimes the best option really is the easiest option. Disk Drill for Windows is a popular and well respected recovery tool which is capable of recovering data from individual RAID disks. Disk Drill is a Windows app compatible with Windows 7/8/10/11 and other modern versions of Windows. While Disk Drill will not repair or recover from the full array at this time it can recover RAID 5 individual files from each disk of the damaged array. Depending on your array configuration this may allow for substantial file recovery even without being able to repair the full array.

How to Restore Files with Disk Drill for Windows

It’s possible to recover data from a RAID 1 array even after formatting or deleting the hard drives. In a RAID 1 array setup, data can get lost due to hard drive mechanical damage, drive failure or accidental deletion. You can still recover your data from all those scenarios with exception of physical damage. 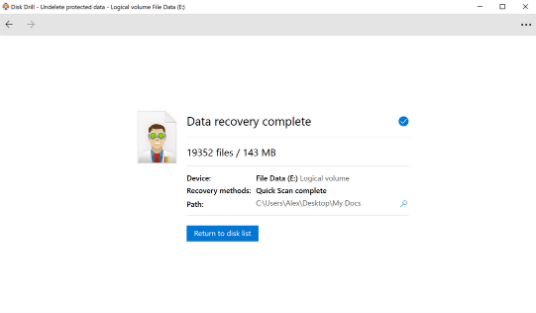 There are quite a few software options available although few are targeted specifically at RAID. In many cases your best option may be to simply work towards recovering individual files from the separate disks. Disk Drill is a great tool for recovering files individually from RAID array disks when the array has failed and alternate recovery options are no longer available. Disk Drill by Cleverfiles can detect 300+ file types and scan even when the partition table is not longer intact.

How to Recover Deleted Files from Your Hard Drive

RAID 5 Data Recovery is the same as in RAID 0, RAID 1 recoveries, probability varies but there is one additional step specific to RAID 5. The best method for RAID 5 data recovery is to first rebuild your disk array.

A popular tool for recovering from RAID failures is: Stellar Phoenix RAID recovery. There are quite a few pros and cons to this software which go beyond the scope of this article, however essentially with all RAID recovery tools the probability of success ultimately depends on the original status of the disks and how bad the damage is, in the event multiple disks in an array are damaged, recovery is unlikely for most RAID array types. 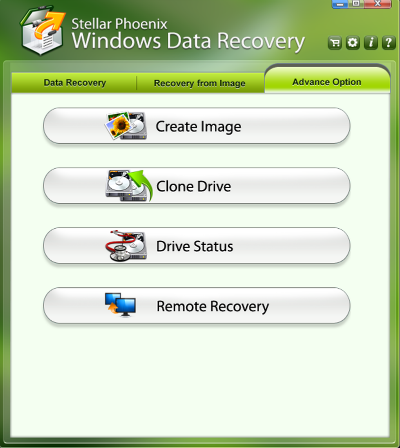 Below are the top 10 RAID recovery services recognized by users online. While we have not individually reviewed each of these tools (at this time), these are the most commonly utilized tools for complete or partial (single Disk) RAID recovery.

Disk Drill is a popular choice not just due to its ability to recover individual RAID disks but also it’s upcoming full RAID support. Recognized as one of the top free data recovery RAID solutions for Windows 7/8/10/11 (and Mac), Disk Drill will be a welcomed and powerful addition to our list of RAID recovery software.

Presently Disk Drill works great as a do-It-yourself RAID recovery tool that can read, recover and retrieve data from individual RAID disks with damaged partitions, formatted partitions or accidentally deleted data. It can also scan data from a wide array of devices ranging from Flash drives, USB sticks, cameras, iPhones, iPads etc. While some RAID recovery services advertise a more complete solution, the outcome ultimately depends on how well a software or service handles actual file recovery and that is where Disk Drill comes out ahead. 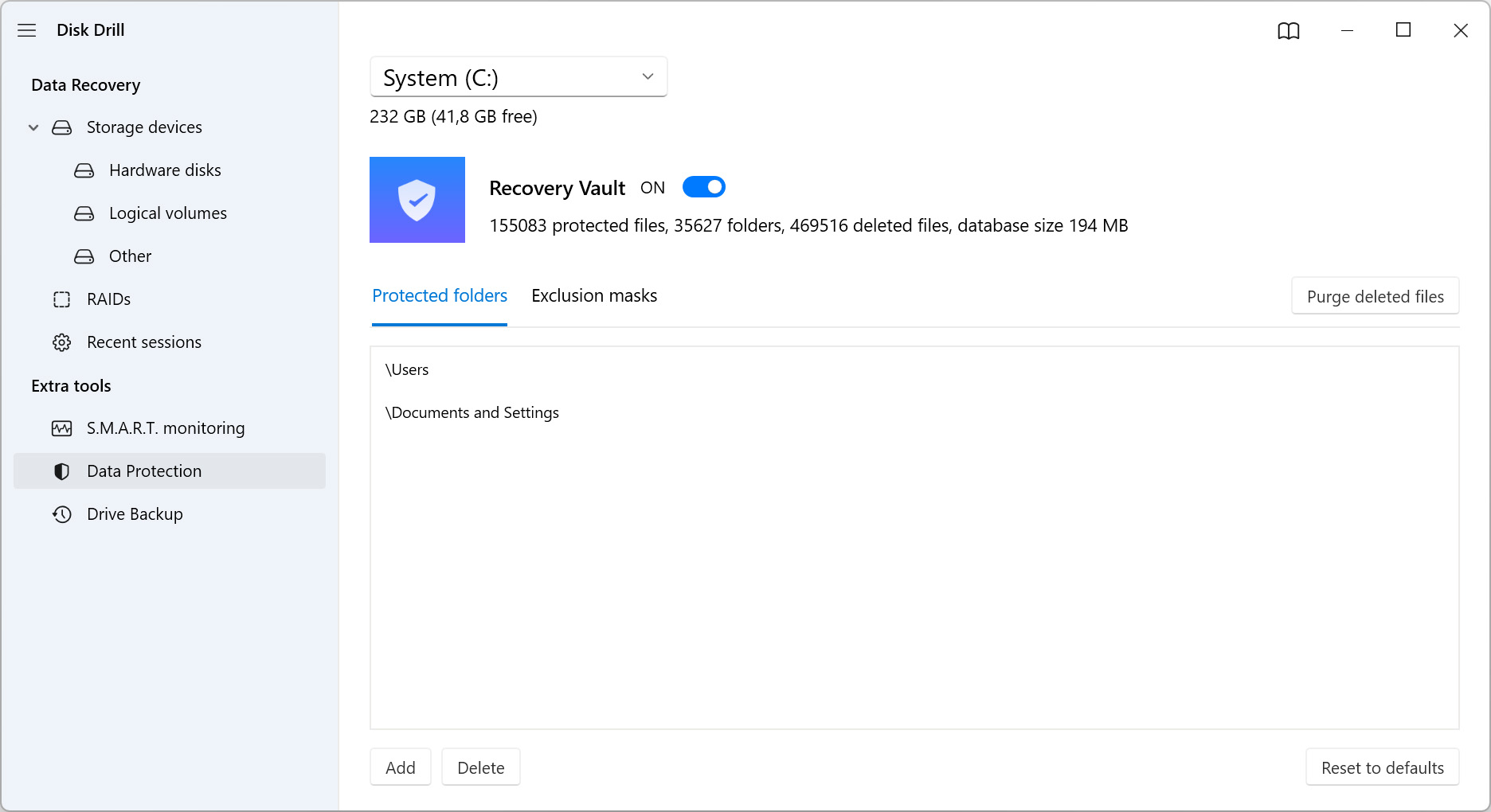 Sometimes the best option really is the easiest option. Disk Drill for Windows is a popular and well respected recovery tool which is capable of recovering data from individual RAID disks. Disk Drill is a Windows app compatible with Windows 7/8/10/11 and other modern versions of Windows. While Disk Drill will not repair or recover from the full array at this time it can recover RAID 5 individual files from each disk of the damaged array. Depending on your array configuration this may allow for substantial file recovery even without being able to repair the full array.

How to Restore Files with Disk Drill for Windows

Find out how to recover deleted files

How to Recover Deleted Partitions on Mac OS X

Back Up a Failing Drive to a Disk Image

How to Recover Deleted Text Messages on Android

How to Recover Linux Data

Find out how Disk Drill helped others