How to Backup Files on a Mac Disk

Disk Drill allows you to backup data on Mac OS X by creating a byte-to-byte disk image. This disk image (or DMG) is an exact copy of your hard drive, usually saved onto a separate external hard drive. Backing up your failing Mac hard drive — and running Mac data recovery from it — has never been easier. MacOS Big Sur Ready! 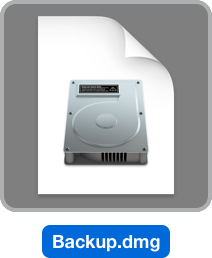 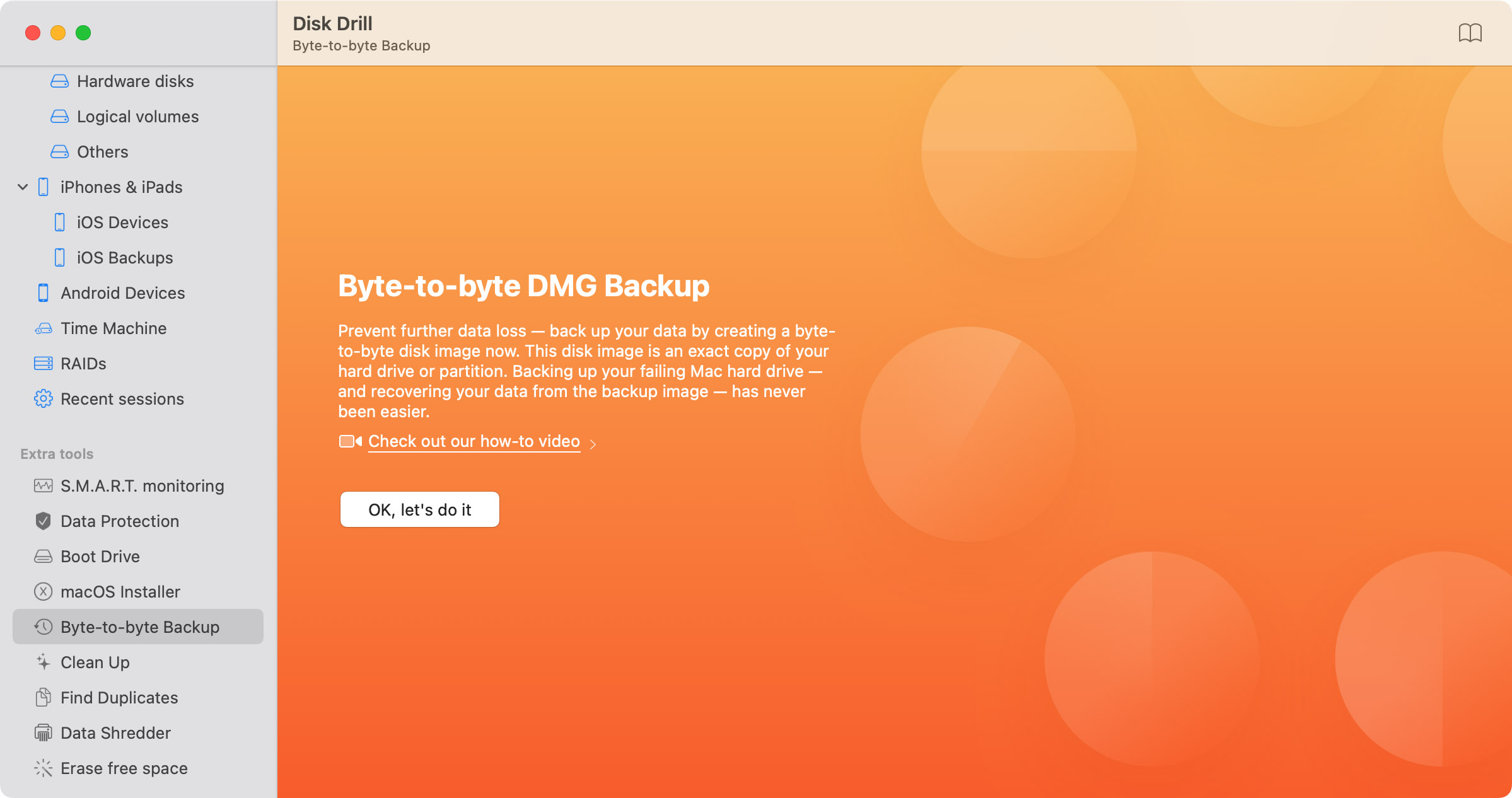 Sooner or later, all hard drives fail. Maybe opening files begins to take minutes instead of seconds. Maybe you even hear strange noises coming from inside your Mac. Maybe you are beginning to see strange messages about corrupted files.

Instead of shrugging off these warning signs, take action to backup data on Mac quickly. Because while it's still working, Disk Drill Mac data backup software can take an exact snapshot of the hard drive, preserve a copy of the data, and recover it later whenever necessary. Hard drive problems only get worse, not better, so the sooner you take this snapshot (also called a disk image, or DMG) of your hard drive, the more chances you have of preserving all of your files.

Disk Drill makes OS X backup quick and painless. Uniquely, Disk Drill includes every bit of data that is on the disk, even the areas marked as free space, which may contain missing deleted files. After, you can run data recovery with Disk Drill and restore missing files right from the backup disk image.

To get started backing up your Mac and taking a snapshot with all of the contents of your hard drive, start Disk Drill. Click "Backup" option from the upper menu and select "Backup into DMG image" option. Read the instructions offered by Disk Drill and follow its prompts to create a byte-to-byte disk image of a drive.

First choose the drive or partition to backup and then set the location to save backup file. Click "Save" and after backup is created use Disk Drill's "Attach Disk Image"
to mount the created DMG file.

So connect a sufficiently large external hard drive to your computer (CDs, DVDs and flash drives are generally not large enough to hold all of the information stored on today's hard drives). In the "Save" dialog box, click on the black arrow on the upper-right, next to the hard drive name. You will now see a list of folders and disks. On the left side of the dialog box, click on the name of the external hard drive that you just connected, then click the Save button. 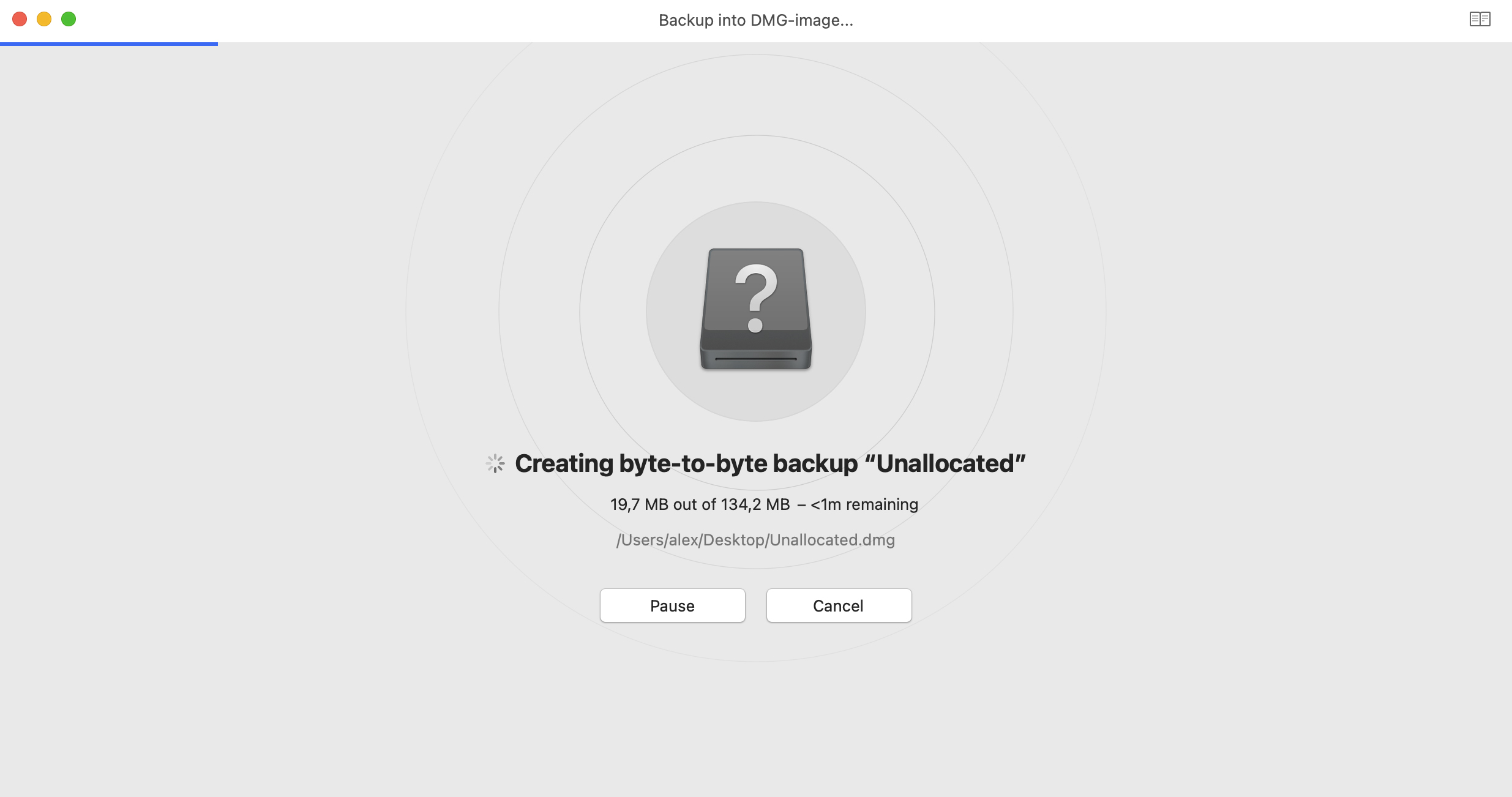 Once the copying process is complete, on your external drive you will have a large DMG file that has the name of your main hard drive. This Mac data backup DMG file is an exact copy of the data on your hard drive. Everything is included in this file, even live files and "empty" sectors that need data recovery in order to be read.

Now that you know how to backup files on Mac, consider a constant protection of any little changes of big importance with the help of Disk Drill's Guaranteed Recovery, Recovery Vault, and S.M.A.R.T. monitoring. These features ensure that all your data is kept safe and no little change is left unguarded. 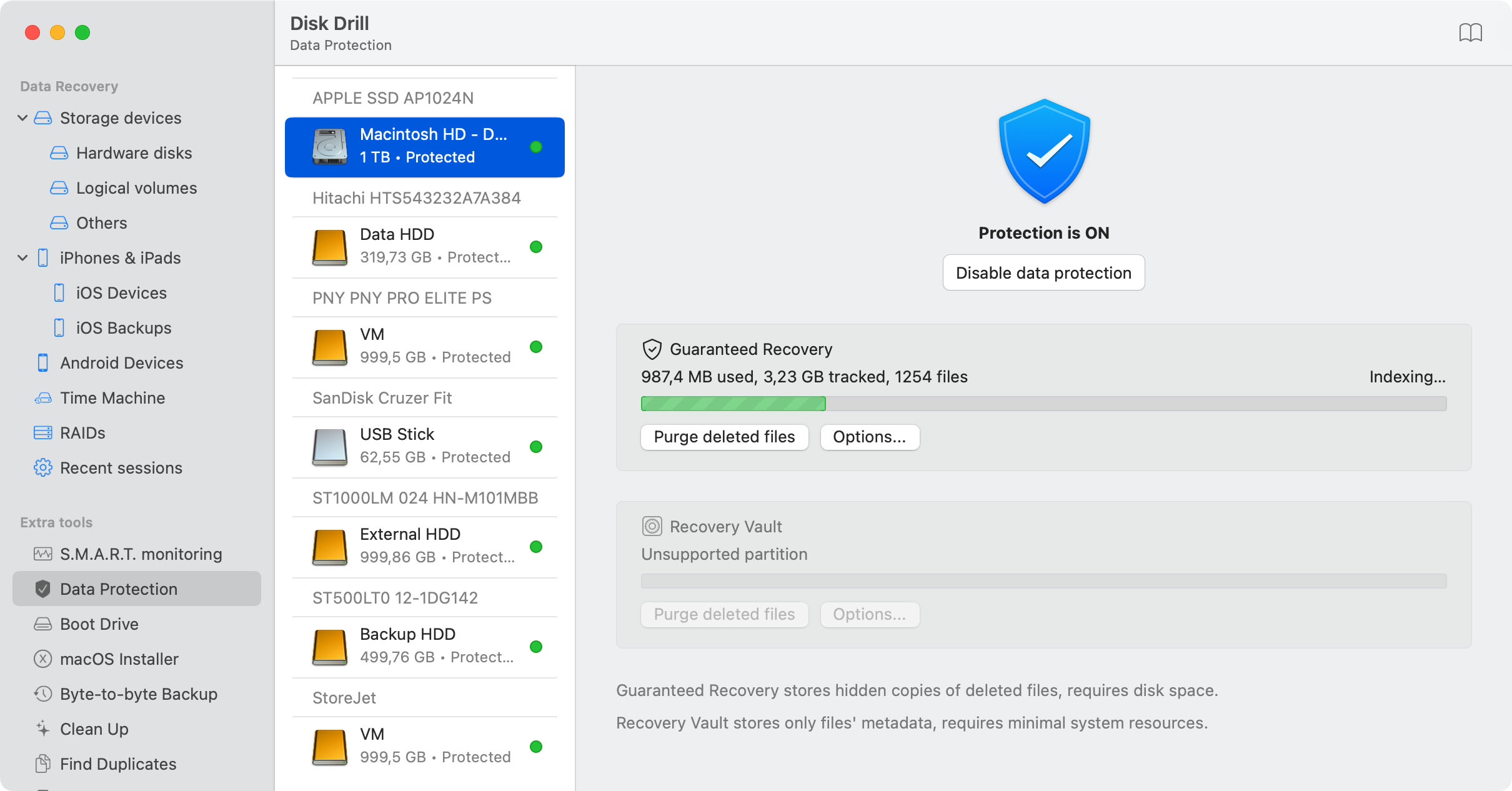 #4 Recover Data from Your Failing Disk

Now you can recover files from the copy you just made. The DMG file is treated by the computer as if it is a "real," physical disk. To mount the disk, either double-click the DMG file icon in the Finder, or use the "Attach non-mountable disk image" option in Disk Drill to select the DMG file. Once the new disk shows up in Disk Drill, you can click the "Recover" button next to its name and start the recovery process.

How to recover deleted files after emptying the trash on Mac

Now you know how to backup data on your Mac. You can now relax knowing that even if your failing hard drive stops working completely, you still have an exact copy that will preserve your vital data. Download Disk Drill, the perfect backup software for Mac today. It's free! BTW, data recovery software for Windows creates perfect recoverable disk backups in ISO format. 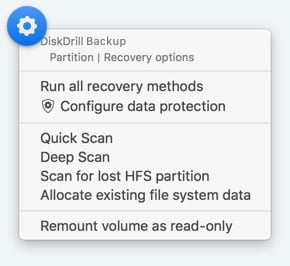 Disk Drill is a thorough scanner

Use Deep Scan feature for those times when there is hardly any file structure left. Disk Drill will scan through the raw data on your hard drive no matter if it is FAT, or NTFS, or something else. It will work file fragments into a single structure and will look for the binary signature of the lost files. Once Disk Drill recognizes a sought for file signature, XLS, DOC, AVI, MP4, JPG, and other formats recovery goes quite fast.

How do I back up files on my Mac?

You can back up files on your Mac using Apple’s own built-in backup feature, called Time Machine:

Keep in mind that the first backup can take a long time to create, especially if you have many files on your computer.

What is the best way to back up my Mac?

Here are the best ways to back up a Mac computer in 2021:

How do I back up my Mac to an external drive?

You can back up your Mac to an external drive using Time Machine, a built-in backup feature that lets you automatically back up your personal data:

In fact, Time Machine only works with external drives (and shared network folders), connected using either USB or Thunderbolt.

Can you back up a Mac without an external hard drive?

Yes, you can back up your Mac without using an external hard drive. There are many backup tools, such as the byte-to-byte feature included for free in Disk Drill, that let you save your backup to any suitably large storage device. Alternatively, you can also use a cloud storage service like iCloud, Microsoft OneDrive, or Google Drive.

Can I backup my Mac without using Time Machine?

Absolutely! You can, for example, use the byte-to-byte backup feature in Disk Drill:

How long should a Mac backup take?

That depends entirely on the size and speed of your hard drive. If you have a Mac with a very large hard drive, then a full backup may take several hours, especially if the hard drive isn’t an SSD.

How do I manually back up my Mac?

There are many ways to manually back up a Mac, but it’s never a good idea to rely on just one backup method. Instead, you should combine several methods to achieve redundancy. Here’s an example of how you can do just that:

Learn All About
Mac Data Backup!

Other How To Articles

How to Find and Remove Duplicate Files on Mac

How to Recover Deleted Files on Mac

How to Recover Lost Data from Micro SD Cards on Mac

Is it Possible to Recover Deleted Emails?

All about Disk Drill
Get started with data recovery