Where’s the Task Manager on My Mac

Modern operating systems are not flawless. Applications sometimes crash unexpectedly, processes hang up and take up precious computing resources, and files get lost or corrupted because of bugs. Task managers are useful applications that let you monitor what’s happening on your computer and provide you with the ability to shut down misbehaving processes and file system activity for read and write events on sensitive data. 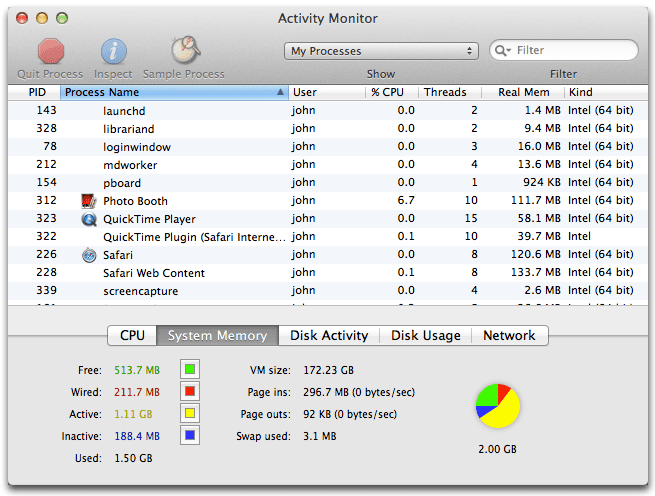 Just like Windows has a task manager, called simply Task Manager, macOS also comes with an application that provides information about computer performance and running software and allows users to terminate processes if they start misbehaving forcibly. This article introduces the official task manager in macOS, explains what it can do, and presents three alternative Mac task managers for users who would like to explore other options.

Activity Monitor Is the Task Manager for Mac

If you go to the Utilities folder under Applications on your Mac, that’s where you can find Activity Monitor, the official task manager for Mac computers. Seeing Activity Monitor for the first time can be overwhelming as the application displays a plethora of information at the same time. But once you understand what Activity Monitor does and how to use it to keep your computer running like a well-oiled machine, the initial bewilderment will be quickly replaced by an appreciation for its usefulness.

There are several tabs at the top of the Activity Monitor window: CPU, memory, energy, disk, network, and cache. Using these buttons, you can see how processes are affecting your Mac computer.

3 Ways on How to Open Task Manager on Mac

There are several ways how you can open Activity Monitor, some more convenient than others:

How to Use Mac Task Manager

To use Mac’s task manager, Activity Monitor, to stop a process, simply select the process you want to stop from the main application window and click on the stop button located in the top-left corner of the window.

After playing with Activity Monitor for a while, many people discover that one particular process, called kernel_task, is taking up a lot of system resources and start wondering whether it’s possible to kill it.

Because kernel_task is essentially the core of the macOS operating system, it’s impossible to stop it without making the entire system unusable. 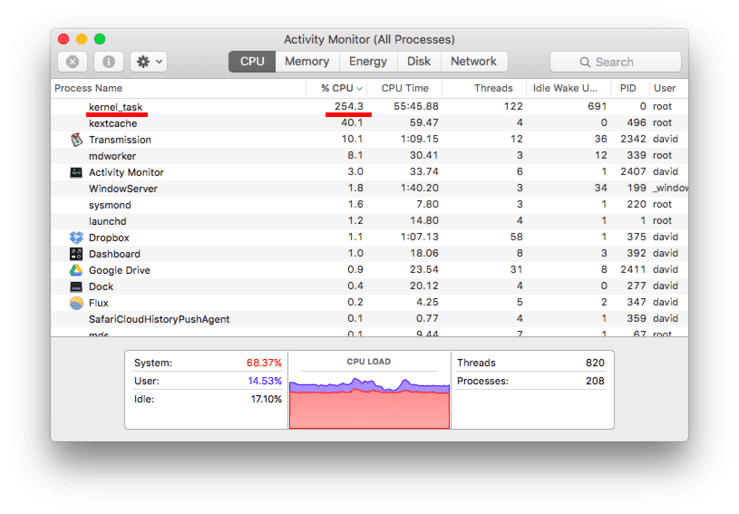 According to Apple, “one of the functions of kernel_task is to help manage CPU temperature by making the CPU less available to processes that are using it intensely”. Sometimes, an application stops behaving as it should and enters into an endless loop, consuming system resources without doing anything useful. The kernel_task process then often steps in and enters into a similar looped state, unable to tame the application that has gone wild. Typically, the only solution is to restart the computer and avoid the problematic application.

Being the official task manager for Mac computers, Activity Monitor is tightly integrated with the macOS operating system and has all the features needed to manage tasks. Despite its first-class status, there are a few mac OS task managers worth having installed on your computer for those occasions when Activity Monitor isn’t enough to accomplish everything you want to do.

iStat Menus is an advanced Mac task manager with notifications based on CPU, network, disk, battery, weather, and other events, support for hotkeys, reorderable drop-down menus, a compact notification center widget, and many more other options. We love how iStat Menus can reside entirely in the menubar and display essential information at a glance. A single license costs $18.14 for new users and $12.09 for users coming from an older version. 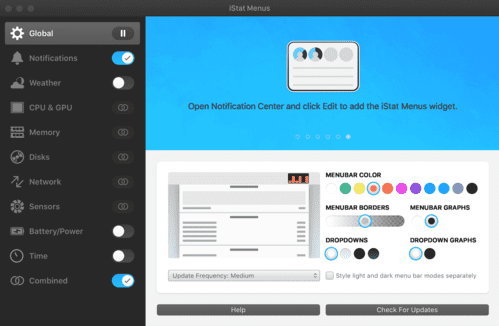 BitBar is an extremely versatile addon for the menu bar that can display all sorts of useful information, including battery health, CPU temperature, CPU load, disk usage, CPU usage, power status, and much, much more. BitBar also supports plugins, and many developers already contributed an impressive number of plugins to BitBar’s plugin repository. If you have the skills and are willing to contribute, you can create your own plugin for BitBar and submit it to be included with other plugins on BitBar’s official website.

XRG is an open source system monitor for macOS. Just like Activity Monitor, XRG allows you to monitor CPU activity, memory usage, battery status, network activity, and disk usage. Besides these, XRG also makes it possible to display stock market data, current weather, and more. It’s lightweight, easy to use, and works with all recent versions of macOS.

Applications don’t like when they are shut down suddenly using Activity Monitor or any other task manager. In some cases, you may even experience data corruption or data loss. Unfortunately, task managers can’t help you recover your lost or corrupted data. For that, you need a data recovery application such as Disk Drill. With it, you can quickly and painlessly recover virtually any file format, including images, videos, documents, and others.

Besides data recovery, Disk Drill can also help you keep your hard drive nice and tidy as it comes with several useful disk tools. For example, Duplicate Finder can help you find duplicate files, Mac Cleanup can tell you which files take too much space on your drive, and data backup makes it possible to create byte-to-byte disk and partition backups. You can download Disk Drill for free from its official website.