Who hasn’t encountered an unresponsive application before? If you’ve been using Windows, you probably know what to do when an application decides to stop responding: you press the Ctrl + Alt + Del keyboard shortcut, open Task Manager, select the troublemaker, and click End task. Simple, and it works every time. But what can you do on a Mac? Is there something like Ctrl + Alt + Del for Mac users? Let’s find out!

Before we can recommend a suitable alternative to Ctrl + Alt + Del, we should first take a closer look at what the shortcut actually does. When you press this three-key combination on Windows, the screen turns blue and four main options appear: 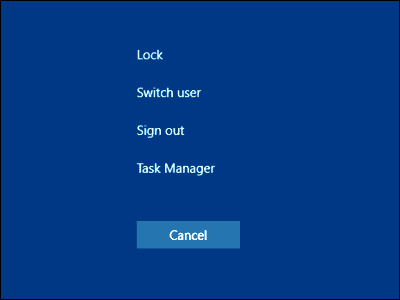 A satisfactory alternative to the Ctrl + Alt + Del shortcut should provide all these functions, or, at least, the most essential one: the ability to force-close unresponsive applications. The good news is that macOS offers multiple such alternatives.

While not exactly an ideal Mac Ctrl + Alt + Del alternative, the Command + Option + Escape key combination is still one of several shortcuts that all Mac users should memorize.

Apart from pressing the Command + Option + Escape key combination to bring up the Force Quit Applications window, you can also open the same window from the Apple menu. 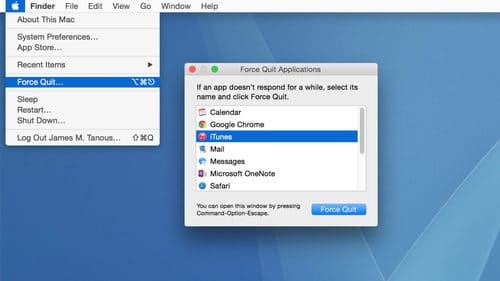 More often than not, unresponsive applications prevent you from interacting with the menu bar at the top of the screen. This is particularly frustrating for people with disabilities as it forces them to press the Command + Option + Escape key combination to bring up the Force Quit Applications window, instead of conveniently opening the same window from the Apple menu.

Fortunately, you can also close unresponsive applications from the Dock at the bottom of the screen.

Activity Monitor is a system monitor for the macOS operating system, and it offers similar functionality to Task Manager in Windows. You can open it by going to the Finder and navigating to Applications → Utilities → Activity Monitor.

Activity Monitor displays all running applications sorted by their CPU, memory, energy, disk, or network usage. You can double-click on any application to bring up a separate window with more information about it and the option to close it.

Because Activity Monitor is so useful, it makes sense to create a keyboard shortcut to it using something like BetterTouchTool, a feature-packed application that allows you to customize various input devices on your Mac.

The Control + Shift + Eject key combination isn’t like the first four Ctrl + Alt + Del Mac (or Alt + Ctrl + Del Mac) alternatives described in this article, but it allows you to quickly lock your computer so you can safely walk away from it to enjoy a nice cup of hot coffee knowing that nobody won’t be able to use your computer.

If you don’t have a keyboard with an Eject key, you can also use the Control + Shift + Power combination to accomplish the same.

Every time you use the Ctrl + Alt + Del Mac keyboard shortcut to close an application, you risk losing valuable data. Unfortunately, sometimes you simply have no other choice, so the question becomes how to minimize the damage.

First of all, you should always back up your data to minimize the negative consequences of a sudden application crash or hard drive failure. Likewise, you should save often and preferably to the cloud. Many applications have an auto-save feature, and it’s always a good idea to activate it. Don’t worry: it won’t slow down your computer even if it is very old.

How to Recover Accidentally Deleted Files

If you notice that some of your files are missing after force-closing an application, there’s a good chance that you’ll be able to recover them if you act quickly and use the right software.

Disk Drill is a popular data recovery solution for macOS and Windows, featuring the ability to recover over 200 file formats from all major storage devices.

Disk Drill also comes with a free backup tool, so you can use it to protect your valuable data and minimize the negative consequences of a sudden application crash. In addition to its excellent data backup tool, Disk Drill also includes a free disk health monitor, a cleanup utility, duplicate finder, data protection tool, and the option to create a bootable USB recovery drive.

Disk Drill is available for free and runs on macOS 10.8.5 or newer. There’s also a professional version of Disk Drill for those who like to access all of its features and optionally receive lifetime upgrades for free. Enterprise customers can purchase Disk Drill Enterprise, which is a full-featured commercial data recovery package with top-level support for the whole company and forensic data export capabilities.

Using a computer that crashes and freezes all the time is no fun. Fortunately, there are a few things you can do to keep your computer in a good working order.

Finally, you should avoid using unoptimized software that’s prone to crashes. Some applications are simply so badly written that crashes are to be expected. Unless you want to rely on the Ctrl + Alt + Del key combination and its alternatives all the time, it’s best to avoid such applications and look for alternatives instead. These days, there’s so many excellent software applications for Mac to choose from that no application is irreplaceable.