What is the Concept of Wear Leveling on an SSD Drive?

Home / Extra Tools / What is the Concept of Wear Leveling on an SSD Drive?
Posted on May 1, 2019 by CleverFiles Team

A Solid State Drive (SSD) is a storage device that is constructed without the use of moving mechanical parts. An SSD stores data electronically by employing flash memory. Their architecture is a radical departure from the traditional storage devices previously in use.

SSD drives are popular as the primary storage in high-end laptops for a number of reasons. We are going to take a look at what differentiates SSD drives from traditional hard drives and then focus in on how wear leveling is used to extend their useful lifespans.

Solid State Drives began to gain popularity in the late 2000s. When they were first introduced they were substantially more expensive than mechanically-based hard drives, and still cost more than a hard disk drive (HDD). You will pay more for a similarly sized SSD when compared to an HDD, but the prices for SSDs are dropping, closing the price gap.

There are a number of different ways to compare solid state versus mechanical hard drives. Let’s take a look at how these two very different technologies stack up against each other.

HDDs store data magnetically on a rotating platter. They use a physical read/write head that floats above the platter to enable data access. SSDs usually employ NAND-based flash memory to provide data storage. The data is stored in non-volatile memory chips and accessed via a controller that performs logical functions related to reading, writing, and maintaining the information on the SSD.

Storage capacity is one of the only areas where you will find that HDDs offer an advantage over SSDs. Most SSDs are in the one to four terabyte range as far as storage capacity is concerned and you can obtain HDDs that will store many terabytes of data. If your primary concern is providing the maximum amount of storage space at the lowest cost, an HDD is probably the way to go. This may be changing as SSDs continue to evolve. Samsung recently announced the development of a 30TB SSD device that can challenge the capacity of the HDD competition.

Hard drives require start-up time to spin up before they can operate properly. SSDs do not have these time constraints and are essentially instantly turned on at the user’s demand. They also do not need to move any mechanical parts to search for data making it faster to access the information on the drive. SSDs are definitely faster than HDDs, as can be seen by how fast an SSD powered Apple MacBook boots in comparison to notebooks that employ an HDD as their startup disk.

Fragmentation is related to speed in that a fragmented file will take longer to fully access than one that is kept contiguously on adjacent blocks of a hard drive’s disk platter. HDDs are prone to file fragmentation as they get filled up with parts of large files stored at various locations on a disk. This slows down the disk’s performance when called upon to retrieve a fragmented file.

SSDs are not subject to fragmentation. Once they are not using a physical read head, data stored anywhere on the device can be accessed in the same amount of time. This factor contributes to the speed of an SSD and eliminates the housekeeping requirement of defragmentation that is needed to maintain the performance of an HDD.

Since an SSD does not contain any moving parts it can withstand the bumps and jolts that can occur when used in a laptop. An HDD is far more likely to experience problems in a physically demanding setting, making SSDs the preferred solution in laptop machines.

These three aspects of SSDs and HDDs can be grouped together because in all cases, the SSD uses or produces less than an HDD. The size of functioning spinning magnetic disks is a limiting factor for HDDs that is not present in SSDs meaning they can be smaller. SSDs also consume less power and are silent in comparison to their noise-generating and power-hungry counterparts.

Both HDDs and SSDs will eventually wear out over time. The mechanical parts of an HDD will wear down and degrade or prohibit performance. In an SSD, the flash memory will also wear and degrade according to the basic tenets of physics. Let’s dive a little deeper into how SSDs wear to find out what the term “wear leveling” means and how it impacts and can be measured on your storage devices.

What is SSD Wear Leveling?

In order to understand wear leveling, we must first look at the way that an SSD storage device degrades when used repeatedly. Flash memory banks are comprised of individual cells that are used to actually store data. Reading from a cell does not contribute to its degradation, but erasing and writing does.

Wear leveling is performed by the micro-controller or the firmware of the SSD device. The process of wear leveling is conducted by algorithms, of which there are two basic varieties.

Support for the TRIM command which is concerned with instructing flash devices when a memory block can be erased and garbage collection are two alternative methods of extending the life on an SSD.

Measuring the Wear on an SSD Storage Device

There are a number of ways that you can interrogate your SSD to determine its current wear level. Self-Monitoring, Analysis, and Reporting Technology (S.M.A.R.T.) disk tools can provide a wealth of information covering your SSD including its wear leveling count. This statistic is based on S.M.A.R.T. indicator 173 and 177 which can be monitored with various disk tools.

You can obtain other disk reporting tools and health monitors that can help you keep track of the wear levels of your SSD. Be advised that not all SSD drives are supported and can successfully interact with S.M.A.R.T. monitoring so the results can be unreliable. You can check the ability of your Mac’s drive to take advantage of S.M.A.R.T. monitoring by using the information available in Disk Utility.

The wear_leveling_count is intended to give an indication of the remaining lifespan of an SSD device. It is expressed as a percentage showing the expected remaining lifespan of your drive. The number starts at 100 and continuously decreases. Keeping track of the changes that this number experiences over time can give you a good sense of how fast you are using up the SSD drive and alerts you to when it might be time to replace it. 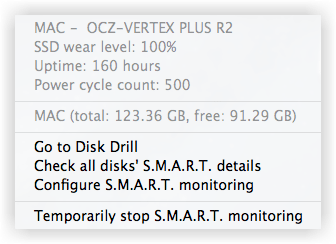 This display indicates that your disk is not worn at all.

While there is no hard and fast rule concerning when it’s time to replace your SSD, devices that are under 50% should be monitored to avoid catastrophic failures. Remember to perform regularly scheduled backups to keep your data safe in the event that an unexpected drive problem arises.