The Most Common Questions about SWF Video File Format

What is SWF File Format?

SWF is a video file format created by Adobe Systems for its Flash app. It can contain text, vector and raster graphs, and content written in ActionScript. 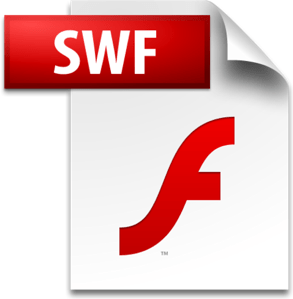 SWF (pronounced “swif”) was originally an acronym for Shockwave Flash. Later, it was modified by Adobe to mean Small Web Format.

An SWF file contains a header that is followed by a series of tagged data blocks. The two different types of tags are definition tags and control tags.

Definition tags define the content with objects known as characters. Characters are stored in a dictionary. Examples of characters are shapes, sound and text. Control tags create and manipulate rendered instances of characters, and control the flow of the file. Data inside the block can only point to offsets within the block. This enables tag insertion, removal and modification.

Since SWF files are usually transmitted over networks, they must be as compact as possible. This is achieved through several techniques, including reuse, compression, default values, change encoding and shape data structure.

SWF files are used for multimedia, vector graphics and ActionScript. They can be part of programs using ActionScript.

The firm FutureWave Software defined the SWF file format, with the idea of creating a standard for small files that given an application, could run on any system and slow network connections.

In 2005 Adobe acquired Macromedia, and in 2008 released the SWF code as part of its OpenScreen Project. However, the initial code release was incomplete, and only on July 1, 2008, Adobe published the complete code. This release permitted Google and Yahoo search engines to crawl and index SWF files.

A study in 2010 revealed that in most developed countries, 99% of web browsers have a SWF player installed.

How to Recover Deleted SWF Files

Many times an unintended deletion creates the problem: how to recover deleted SWF files? The important thing to know is that they may still be in your digital device. The reason is that when you delete a file, the operating system only removes a reference to it. The content remains intact, until overwritten by another file.

Disk Drill is a data recovery application that uses algorithms that search for this remaining content. It is available for free!

The procedure to recover SWF files is simple. The necessary steps are:

Your SWF recovery is done!

How to Use Image Files to Recover SWF Files

Image files are a bit-by-bit copy of the original source. Thus, they include all deleted files still on the drive.

The main advantage of doing your SWF recovery on an image copy, is the reduced risk of damaging the original device. For this reason, it is a standard practice in Digital Forensics.

Disk Drill is a very comprehensive app, and it allows you to create an image copy, which you can attach to the app, and use it to perform your SWF file recovery in a safer manner. Just consult our website for instructions on how to do it.