How to Open or Recover MKV File Format

What is MKV File Format?

A MKV file format is a container of video, audio and subtitles. It is based on Matroska, which is an extensible open source, open standard multimedia container developed by the Matroska Organization. 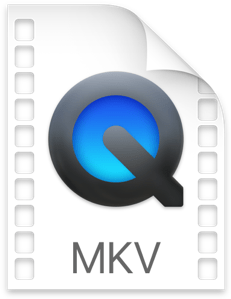 Matroska uses Extensible Binary Meta Language (EBML) for development. EBML is a binary derivative of XML, which enables extensibility. In this manner, the Matroska container can include future file formats, without losing support for old ones.

The MKV file format divides the data into blocks. Blocks in turn are grouped into block groups and clusters. Time code metadata is defined in the blocks, block-groups, and clusters headers.

MKV files support a variety of codecs. The subtitle formats supported are SRT, SSA, and USF (Universal Subtitle Format). It also supports VobSub for DVDs. It can also contain 3D video. The file format also supports encryption, and according to Matroska it can be used as a type of DRM. Matroska has also created codec identifiers similar to the FOURCC, and it has added other more specific identifiers.

This file format is very popular among the anime fan-subbing community, which translates foreign films and foreign television programs into other languages. This popularity is based on the MKV support for multiple audio and subtitle tracks in the same file.

The Matroska project began in 2002 as a split from the Multimedia Container Format project. The name Matroska derives from the Russian word for Russian doll. Matroska is supported by a non-profit organization in France.

The project support is increasing. Later in 2010, it was announced that the WebM file format would be based on the Matroska container. In 2014 Microsoft said that the company would support Matroska out of the Box.

How to Recover Deleted MKV Files

MKV files are becoming increasingly popular thanks to the Matroska project. As a result, many videos use the MKV format.

It is not so difficult to mistakenly delete a MKV file. Fortunately, there is a data recovery application named Disk Drill that can search for deleted files in many digital devices, such as internal and external hard drives, iPhones, USB flash drives, and several more. Disk Drill is available for free!

Once downloaded, do the following steps to recover MKV files:

Your MKV file recovery is done!

How to Use Image Files to Recover MKV Files

Image files are a bit-by-bit copy of a digital drive. Thus, they contain all data available on the drive, including deleted files not yet overwritten by the operating system. Image files are ideal for performing MKV file recovery with little risk, as by working on a binary copy, the original source can remain unmodified. Their use is a standard practice in Computer Forensics.

In addition, image files can be used as a backup tool. The well-known backup rule of 3x2x1 says that backups should be done with three copies, two of different file type and one stored on a different device. Image files provide a useful copy, as they store all the information contained in the drive.

Disk Drill has the capacity to create image files from different sources. In order to save an image copy, go to the “Extras” menu located next to the drive, and select the “Backup into recoverable disk image” option. Then follow the given steps.