Where and How to Use M2TS File Format

What is M2TS File Format? 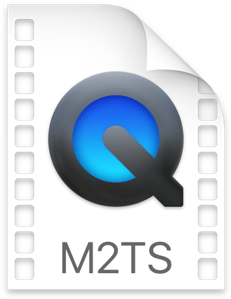 This association is a group of companies that develops and licenses Blu-ray Disk technology. This group was initiated in 2002 by the Massachusetts Institute of Technology (MIT), and became an association in 2004. It includes some market leading companies, such as Sony, Panasonic, Pioneer, Philips, LG Electronics, Hitachi, Sharp, and Samsung Electronics.

The transport streams considered in the M2TS are designed for delivery of data in real time over unreliable transport media. Thus, M2TS files are optimized for multiplexing audio and video, and other streams.

Its main use is on Blu-ray Disks, where it can be contained in BDMV (Blu-ray Disk Movie) format, or BDAV (Blu-ray Disk Audio/Visual) format. M2TS is also used in the AVCHD format for digital video camera recorders.

Most M2TS file names use the convention xxxxx.m2ts, where xxxxx is a 5-digit integer corresponding to the audio-video clip. Files are usually placed in the BDMVSTREAM folder, or the BDAVSTREAM folder.

M2TS files are protected with the Advanced Access Content System (AACS) technology, which encrypts the data. The specification for this technology is developed by the AACS Licensing Administrator. The consortium includes important companies, such as Disney and Sony amongst others. They work under an interim agreement, since the final specification has not yet been finalized.

How to Recover Deleted M2TS Files

It is not difficult to press the wrong key and mistakenly delete a file. Fortunately, there is a file recovery application that can solve the problem and easily recover M2TS files. Its name is Disk Drill, and it is available for free!

With Disk Drill, M2TS file recovery can be done in a few steps:

Your M2TS file recovery is done!

How to Use Image Files to Recover M2TS Files

An image file is a bit-by-bit copy of an original source. By being a copy at a binary level, it contains all the data in the original device, including deleted files. Thus, it is the ideal tool to perform your M2TS file recovery without risk of permanently damaging the digital drive.

Disk Drill contains the necessary functionality to create an image copy. It is available as an option in the “Extras” menu next to each drive. An added advantage is portability, as Disk Drill uses well known image file formats, such as iso and img, which can be opened with many other programs.

The use of image files is a standard practice among Computer Forensics practitioners, as it keeps the original source untouched.

An image files can also be used as a backup tool. Even though it will have the same total size as the original device, it will also contain any deleted files, which can later be recovered.