How to Record Audio on Mac — Free Voice Record Apps

How to Record Audio on Mac

Mac computers are powerful and capable computing devices, aside from the many things you already know your Mac can do, did you know you can easily record audio on your Mac?

How to Record Audio on Mac with QuickTime

The file you save will be a MP4 file, MP4 generally means a very good quality for an audio format. This format can be played on a variety of devices which include: iPad, iPhone, iTunes, Windows and most Smartphones. When using this app, you can record as much audio as your free hard disk space allows. As a result, your Mac voice record files can quickly start to consume a lot of space on your computer. Remember to make sure to not utilize too much disk space, it’s always advisable to leave about 20% of your total disk space available at a minimum. There are quite a few reasons for this including better system performance and also to make your chances of data recovery more successful should you ever need to recover data (with a tool such as Disk Drill for example). Did you know that Disk Drill can also help you free up some precious disk space when your computer gets full?

If you record a very large file, you have the option to edit it and save just what you need with QuickTime. Not only can you trim files but you can take your recorded sound and add it to other recordings to create a single merged sound file. Even though you can use QuickTime to record sound files with a microphone, it’s very limited in overall functionality, especially if you want advanced options like recording all audio system output or special effects. There are many solutions out there that can help you record audio from computer Mac offers a bunch of tricks to accomplish that. This is where a few common alternatives come in handy, we will discuss those below.

How to Record Audio on Mac with Microphone and GarageBand 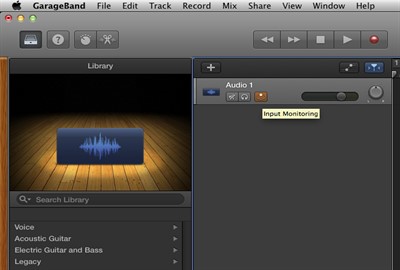 Using your Mac computer to record audio files is very easy because it likely comes with a built-in analog and a digital converter. The analog microphone can be plugged into the Mac line-in port. Using an external microphone is the best way to record voice on Mac computer as the quality will be superior to built-in mics which are best suited for low quality applications such as quick voice or video calls. To help you accomplish recording from your Mac computer, follow these steps:

There are quite a few apps out there which can help to record audio on your Mac, some are better than others, below we will offer a few popular suggestions. These apps can be obtained for free, there are also some commercial options available. You will also note that we include GarageBand below as a third-party solution. Technically, some versions of Mac OS X do not have GarageBand preinstalled and require additional downloading. 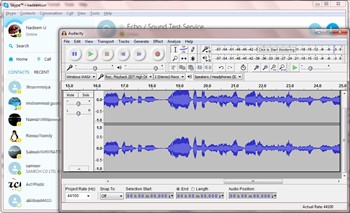 Audacity – Audacity is a good app for recording sounds and it has an editing option so you can edit your Mac voice record. Audacity is open-source and entirely free to use. Audacity is quite a bit more powerful than QuickTime and it can record longer files with ease, the included editing, trimming and conversion tools are far superior. Additional plugins can be downloaded for Audacity which extend its functionality.

GarageBand – GarageBand comes installed on most MacBook computers as it’s used for music. Using GarageBand on your MacBook, MacBook Pro or MacBook Air can turn your computer into a portable studio. This app has a lot of features that you will love such as a full library of sounds built-in, an audio synthesizer is also included. The sample sounds include drummers, percussionists, instruments and other useful presets that go well with guitar and voice. GarageBand is available on the App Store if you do not find it pre-installed on your Mac.

iScream – Another popular suggestion from the Apple store is iScream: Free Voice Recorder for Mac. It is a simple application where you can make one-click recordings using the built-in microphone. It’s perfect for making voice notes or short sound recordings. The main attraction to iScream is its limited set of highly targeted features.

When Your Audio Goes Missing

The apps that were mentioned above are good for recording music or Mac voice record. You likely have recorded a large variety of media files like music, live events, maybe even audio from YouTube or other sources. Now we ask, what happens if you accidentally delete something? There’s this old cliche saying: “Once you delete it, you can’t get it back”, right… or is it? Disk Drill is here to save the day or better yet, prevent the stress! Disk Drill is a powerful file recovery tool for Windows and Mac which can recover deleted or lost files. In addition, Disk Drill has many powerful features like Guaranteed Recovery and Recovery Vault which not only help recover files, but help to prevent file loss in the first place. 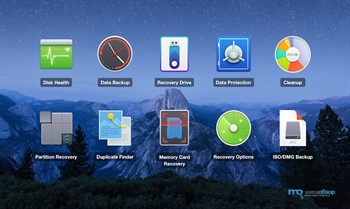 A wide list of file types is also supported for recovery, such as AVI, MPG, MP4, MP3, JPG, PNG, ZIP, over 300 different file types to be exact. Do not lose your important files, recover them with Disk Drill and keep your data safe!