How to Detect a Disk Failure on Windows Computers

If the CPU driving your Windows machine is its brain, then the internal disk must surely be considered its heart. As with your own body, lack of either of these vital components spells disaster. The most powerful CPU in the world is useless without data on which to operate. Your main disk is where everything required to get your computer up and running is located.

Today’s hard drives and SSDs are much more durable than those in the past. There is a reasonable chance that you will not experience any trouble with them during the time you own your machine. Unfortunately, not everyone is so lucky. You may have to deal with a disk failure at some time. We are going to show you why disks fail and illustrate some ways you can predict and perhaps prevent yours from meeting a similar fate.

Why Do Disks Fail?

Your storage device can be either a Hard Disk Drive (HDD) or a Solid State Drive (SSD). An HDD uses a mechanical method to store and extract data from the disk. In an SSD drive, the data is stored in an electrical grid similar to that of the random access memory (RAM) of your system. SSD drives are markedly faster and are used in most modern laptops.

The most common reasons that your drive might fail:

All of these potential hazards are risks for any external drives you have as well as the internal drives of your computer.

How to Predict a Disk Failure

Correctly predicting a disk failure can save you a lot of trouble. But is there a way to accomplish this with a reliable method?

Some clues that you are experiencing drive problems include:

Modern hard drives are equipped with S.M.A.R.T. technology that may be useful in predicting drive failures. S.M.A.R.T. stands for Self-Monitoring, Analysis, and Reporting Technology. While S.M.A.R.T. technology is not perfect, it can provide insights into the viability of your hard drive and the probability that it may fail in the not too distant future. It can give you a warning that your drive may soon fail and give you time to take preventative action.

The S.M.A.R.T. status of your drives can be checked with third-party apps such as Disk Drill, which will soon be incorporating the ability to test these drives in a coming version of its Windows tool.

How to Detect a Disk Failure

Detecting a disk failure can be a fairly simple, yet painful process. Some of the conditions that may indicate a looming drive failure can also be caused by your computer being infected with malware. If you are experiencing slow performance and intermittently deleted files, you will be well served by running a full scan of your machine with a reliable anti-virus and malware detection application.

Some common messages are:

Signs that your drive has failed include the inability to boot your computer or being subjected to consistent crashes and freezes. At this point, it may be too late to take any action to minimize the damage. You may need to employ a third-party data recovery tool to retrieve as much of the data as possible and store it on another storage device. Disk Drill will prove to be a valuable tool if you are in this situation as it can scour the damaged disk on the sector level to reconstruct and recover your files. 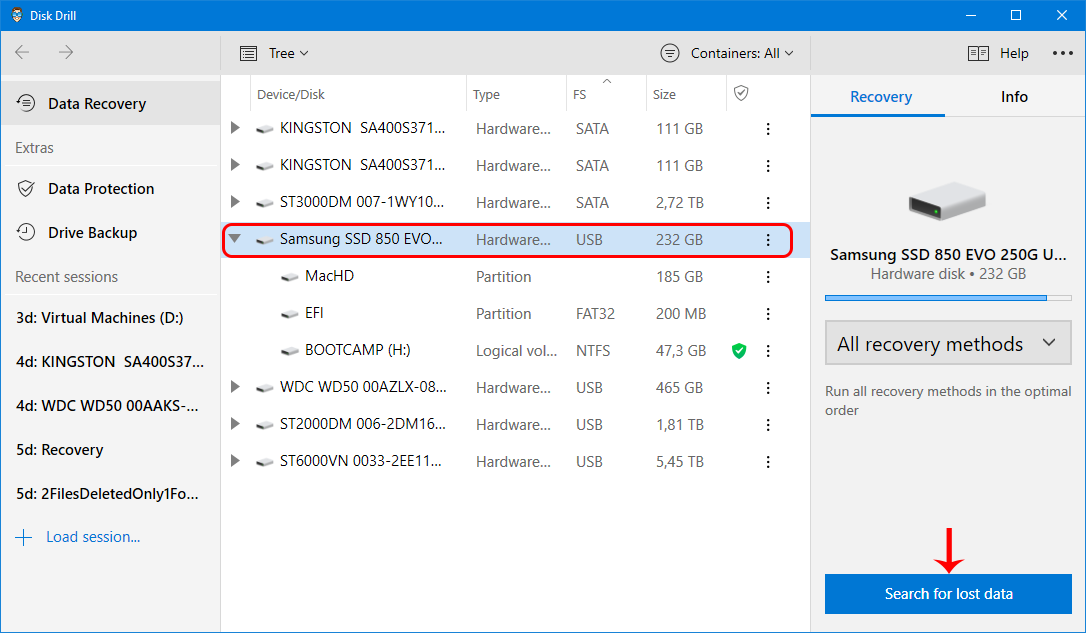 How to Prevent a Disk Failure

If you suspect that your disk is experiencing issues that may lead to its eventual failure, there are a number of actions that you can take to minimize the impact on your computer and data. You may not be able to prevent the failure completely, but you can withstand its impact and escape disaster with these techniques.

Step 1: Take a full backup of your system

This should be the first thing you do if you think your drive is having problems. It’s the best way to protect your data so you can transfer it to a new drive if necessary. Caution needs to be of paramount importance when performing the backup. A damaged disk or one that is about to fail may not be able to withstand the stress of a backup. If you suspect this is the case, you should create a disk image of the drive before making a traditional backup. The disk image can be used to perform data recovery if the drive does indeed die. 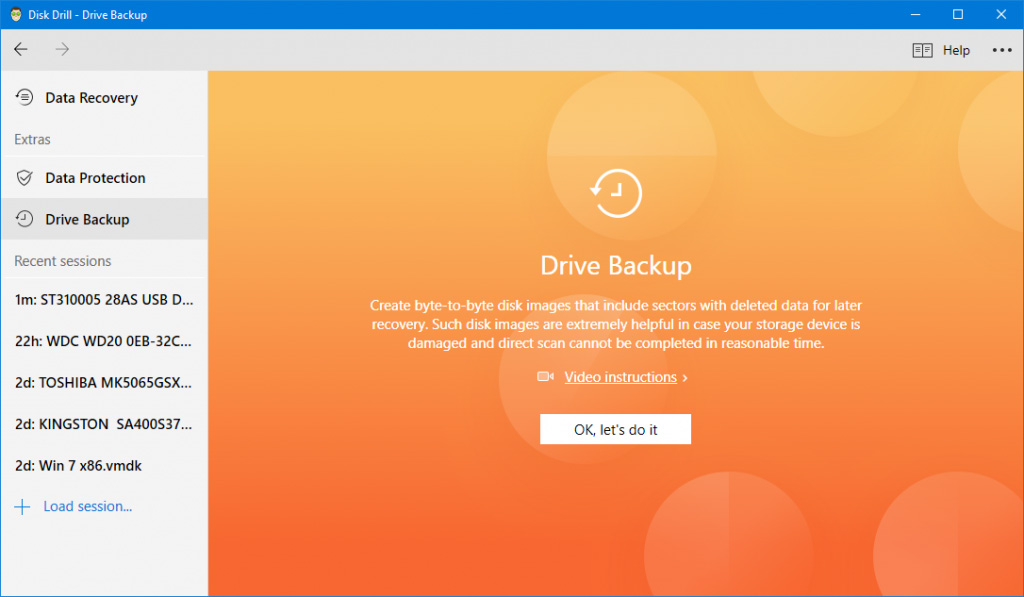 The Windows Check Disk utility, known as chkdsk, can help resolve issues that may lead to a disk failure. It scans your entire drive in an attempt to find and fix problems. It can be time-consuming to run the utility, but it just might help prevent a catastrophic failure down the road. 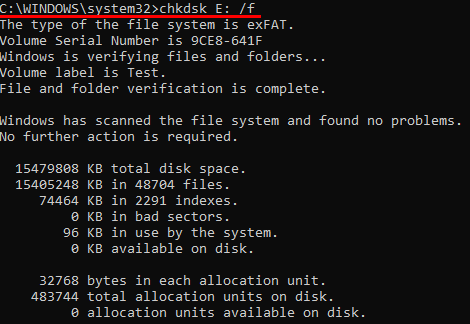 Depending on how the tool is run, chkdsk can perform a couple of different functions. Its main purpose is to verify the file system integrity and correct logical file system errors that it encounters. It also can be used to scan a disk volume to locate bad sectors. Soft bad sectors are fixed by chkdsk and hard bad sectors are marked so the system will not use them again.

You should run this tool periodically as a proactive technique to keep your disk in optimal health. Any time you are experiencing strange issues with your drive or if Windows shuts down abnormally, you should consider running chkdsk to verify that your drive is still in serviceable shape. It’s worth the time you spend checking your disks if it can alert you to potential issues or correct errors before they proliferate.

What to do if Your Disk Fails

You may not be able to prevent a drive failure no matter what measure you take. Perhaps the drive failed while you were backing it up in a last-ditch attempt to save your data. Despair may set in as you think about all of the valuable data that is now out of reach. 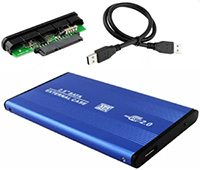 If you can remove the drive, you might try attaching it to another computer that is working properly. Bad sectors on the device may have prevented it from successfully starting your computer, but as a secondary disk, much of its data may still be accessible. Copy the disk’s data as soon as possible if you can get to it. The problem might soon worsen and make it impossible to access the disk at all.

You can send the disk to a data recovery service that may be able to rescue your data. This is an expensive alternative and will entail being without the device for some length of time. It also exposes potentially sensitive data on the disk to a third-party whom you will need to trust.

When you are faced with this type of data loss scenario, Disk Drill can help you out of your predicament. If your drive was subject to some kind of soft failure and can still be accessed, Disk Drill can scan it and recover your data.

It’s a great tool to have around and can be used to create the aforementioned disk image which can be instrumental in recovering data from a failing disk.

Disk Drill offers you the best chance of quickly recovering data from a failing drive through the use of a software tool, eliminating the need to send the drive to an expensive data recovery service.

In some cases, your only course of action is restoring your data to a new drive from a backup. While you will lose recently made changes to your system and files, at least you will be able to recover the bulk of the data. This highlights the importance of maintaining valid backups of your system. If you’re not doing so already, start backing up your computer today!