What You Need to Know about Temporary Folders on Your Mac

Home / Basics / What You Need to Know about Temporary Folders on Your Mac
Posted on January 6, 2019 by Robert Agar

In this article, we are going to enlighten you regarding the subject of temporary folders on your macOS or Mac OS X machine. Before we proceed we offer this word of caution. Deleting files or otherwise playing around in the temp folders can lead to unpleasant, unintended consequences to your operating system.

Restrict your activity to browsing the temp folders to avoid any issues unless you are very sure of what you are doing.

What is a System Folder?

System folders on a Mac are special folders where the files that comprise the heart of your operating system are located. They are protected by enforcing restricted access to the folders and their associated files. Unauthorized users or processes cannot modify these folders or their contents.

A computer’s system folders present a logical target for a virus or malware to exploit. This is the reason that these storage locations are not accessible for the average user or process.

Apple has taken the security of its operating system to a new level with the introduction of System Integrity Protection (SIP) starting with OS X El Capitan in September of 2015. Prior to the rollout of SIP, users with root permissions could access and modify system files, exposing their computer to issues caused by accidental or malicious misuse of this power.

SIP protects these specific components of your operating system:

With SIP enabled, simply having root authority no longer provides sufficient power to modify these critical parts of your OS. Processes such as Apple software updates and Apple installers that are signed by Apple are the only entities that can modify these files and folders. While some superusers may prefer the old days of an all-powerful root user, Apple has opted to lock down its power to better protect your operating system.

What is the Purpose of Temporary Folders?

Temporary folders are created by your operating system or applications and can serve a number of purposes. They are storage locations that can hold cache files or temporary files. While they both hold temporary data, cache and temp files do have some distinguishing characteristics.

Cache files — These files are accessed and updated frequently and often remain on the system after the process that created them has closed. They are persistent files that remain resident on your storage device after you have restarted your system.

An example of a cache file is your browser cache which saves time by reloading webpages from the cache rather than downloading a previously viewed page yet again from the remote server. They are used for storing information that is frequently accessed instead of constantly recreating that data.

Temp files — As their name suggests, temp files have a short and temporary existence on your computer. They are created by the operating system and applications to hold data while a process or installation is taking place, and then removed when the process completes.

An example of a temp file can be seen with applications that allow a user to navigate back through various levels with an undo function. A temp file holds the previous states of your application for use while the app is running. When the program terminates, it should delete the temp file from the system.

Under normal circumstances, you should not have to manually remove any temporary folders or files. The OS should handle that as part of its housekeeping duties. In some cases, you may be instructed to delete specific temporary files when troubleshooting an issue on your machine. As noted, proceed with caution in this endeavor.

Where Are the Temporary Folders on a Mac?

Temporary folders can be found in a number of locations on your Mac. Third-party applications may create temporary folders during installation or execution, and the operating system itself uses temporary files and folders as needed during operation.

command in your Terminal app. This folder and its files are not meant to be user-facing and will present you with a seemingly random directory path as seen below.
$TMPDIR
/var/folders/5j/ngsq010s6s7f3qdrtb76ms140000gn/T/

The Temp folder is not protected by SIP and therefore you can modify, edit, and delete its files. If you view the folder by entering the

command, you will find many temp and cache files that may well be in use by system processes or applications at the moment. As previously mentioned, exercise extreme caution when operating on these files.

There are other temp folders that live on your Mac. Some apps such as Outlook have their own temp folder. 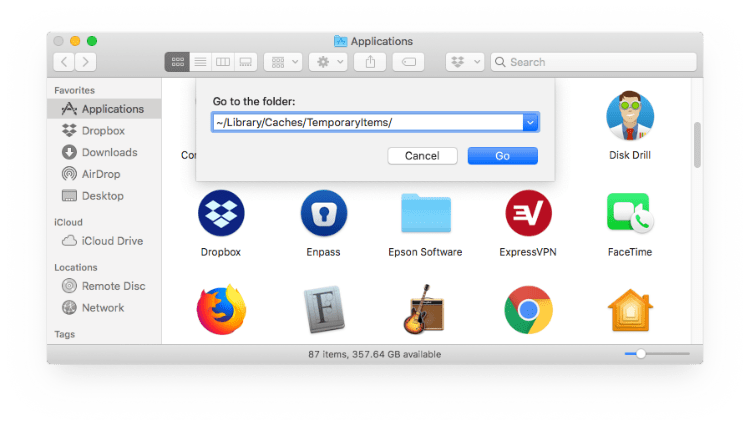 The /tmp folder is a temporary folder accessible by all users. User level temporary directories also exist, with the primary user temp folder found at ~/Library/Caches/TemporaryItems/.

Temporary folders are almost a necessity for the installation and functionality of many applications. By creating a temporary folder during installation, an application need not be concerned with naming conventions or the possibility of having filenames that clash with other apps or system components. This allows for a smooth installation and the temp folders can be deleted by the app when it is finished using them.

After installation, many applications require workspace in order to function properly. If the workspace was populated by persistent files, you would need to constantly keep an eye on your available disk space as these files grow in size with each use of the application. Properly designed applications will create temporary files in order to perform their functions and then delete them to reduce their disk usage.

Various operating system components make use of temporary folders and files when performing their designated functions. The Mac operating system is designed to clear these files when no longer needed to conserve disk space and maintain optimum performance. Without the use of temporary files, your storage space would quickly be exhausted as system files would exhibit consistent growth as you used your system.

When a process or application is finished using its temporary folders or files, they are marked for deletion by the operating system. As with all files on your Mac, this deletion is not immediate. The storage space occupied by the folders is marked as available to the system and will be used when your Mac requires that space for other purposes.

When you experience a data loss by noticing that files or folders have disappeared from your computer, you need to take immediate action to prevent further damage to the files in question. Perhaps the files you are interested in are still available but are not visible to your operating system.

For these reasons, you need to stop using the storage device that contained your deleted files as soon as you discover they are missing. You should use another disk, such as a USB drive, to download and install your data recovery tool, such as Disk Drill. Performing the recovery from the alternate drive gives you the best chance of recovering your files before they are inadvertently overwritten by your OS.

Disk Drill treats temporary folders the same way it handles any data resident on a storage device that is being used for a data recovery operation. Disk Drill scans your hard drive and discovers complete files that are no longer visible to your OS as well as fragments of files that can be reconstructed into viable files again. Existing files can easily be retrieved using the “Allocate existing file system data” recovery method.

The best way to ensure that you are obtaining the maximum potential from Disk Drill’s data recovery algorithms is to scan your entire storage device rather than individual volumes or folders. This allows the application to scour your device, including all temporary folders, and recover the most data possible.

The deep scanning technology employed by Disk Drill looks at your storage device on a sector-by-sector basis and can recover any files that have not been overwritten by your OS. Minimizing the possibility that temp folders and files will be created and overwrite your precious data by stopping the use of the affected storage device is key to a successful recovery.

We hope you have gained some insight into your Mac’s temporary folders and how they can impact an attempted data recovery. If presented with a data recovery scenario, keep these facts in mind to give yourself the chance for a successful outcome using the power of Disk Drill to restore your data.