What You Need to Know about Disk Image Data Recovery: DMG, ISO, BIN/CUE

One of the most appealing characteristics of the macOS is the combination of power and simplicity that the operating system provides a user. The Mac’s ease of use often insulates us from the inner workings of the incredible technology that lurks behind its elegant interface.

While it is not a necessity to understand every aspect of your computer and operating system in order to put them to very productive uses, there are times when it’s worth looking under the hood to see what’s really going on. You might find that obtaining a deeper understanding of the technology you take for granted can help you in unexpected ways.

A case in point is the entity known as a disk image. Let’s take a closer look at what a disk image is and how you might be exposed to them while using your Mac.

What is a Disk Image?

A disk image is a single file or storage device that usually contains a sector-by-sector replica of all of the data from a storage device such as a hard drive, DVD or floppy disk. It is an exact copy of the source device that includes the files and structure of the original storage medium. Disk images can be useful in many ways, such as:

Disk images can be made in a variety of formats. Two of the more popular formats are the DMG and ISO disk image formats. The ISO format is more favored by the Windows operating system. Mac users will usually find themselves interacting with DMG disk image files.

Creating Disk Images on Your Mac

There are several ways that you can create a disk image on your Mac. Here are three methods for making a DMG file on your Mac. 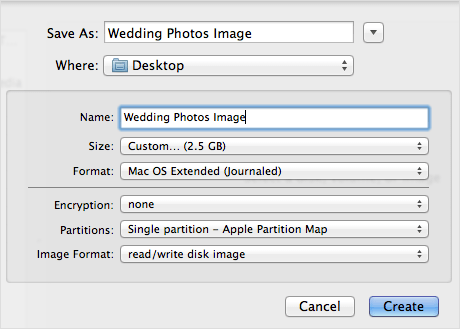 2. Select Backup from the menu.
3. Choose Backup into DMG image. 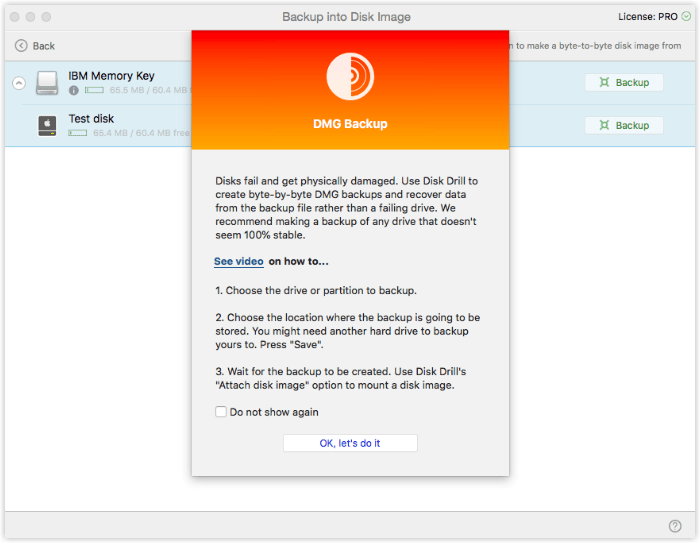 4. Select the source drive or partition.
5. Click Backup.
6. Select the location where the image is to be stored.
7. Click save to create the image.

You can use the Terminal application and employ the hdiutil create command to create a disk image from the command line.

A disk image is often used to download software on the Internet. Mac users have probably downloaded many DMG files that are mounted as virtual drives on your desktop. When used in this manner they are a reminder of a time when floppy disks ruled the software distribution world. They are a streamlined way to distribute code and even complete operating systems can be downloaded in disk image format.

Creating a byte-by-byte backup of your system ensures that you can perfectly recreate the system if the need arises. It is a more resilient way to backup your system than the more commonly used logical backup. Using disk images along with logical backups will provide you with a robust backup scheme to protect your valuable data.

A disk image is the most precise copy of the original disk that you can create. It removes the logical layers of backup software and file systems to concentrate on the physical bytes resident on the storage device.

The presence of a disk image can be instrumental in your ability to perform a successful data recovery on a damaged or corrupted storage device. If you think there is even a remote chance that your hard drive is experiencing problems you should make a byte-by-byte disk image to protect yourself.

We will look more closely at how disk images and Disk Drill software can be used to perform valuable data recovery operations.

There are many ways that a disk image can be used to extract or recover data that was previously on another storage device. Let’s take a closer look at a few of them.

Disk Drill employs powerful scanning technology to locate and recover data from a standard ISO image. In cases where the Finder cannot read your data or Disk Utility reports the image as unformatted, Disk Drill employs its own “Allocate Existing File System Data” method in an attempt to complete the restore.

A byte-to-byte backup saved to an ISO disk image can be scavenged for deleted data by all of Disk Drill’s resources. The tool can mount the disk image and use its sophisticated scanning and data recovery algorithms to extract your files to a new location.

There are often overt or subtle signs that your hard drive is experiencing problems. In some cases, the act of scanning your drive to recover data may be more than it can physically handle. You risk a totally inoperative drive by attempting a direct data recovery.

A better solution is to use Disk Drill to create a disk image from which to attempt your data recovery. Rather than subject the storage device to the stress that will ensue with the scanning necessary to recover your data, creating a disk image will entail only one more disk access across the device. This is highly preferable and is the recommended method when recovering files from a damaged or failing drive or partition.

Disk Drill will use the recently created DMG file and perform its scanning and recovery magic on it. Once your data is successfully recovered you should probably start making plans to replace the failing drive. If you choose to continue to use it, a good practice would be to make regular disk image backups for added data protection.

Extracting Bin or Cue Disk Images on a Mac

You may have occasion to convert .bin or .cue files into an ISO file that can be used by other applications on your Mac. We will use two freeware software tools in order to accomplish this feat. First, we will install the Homebrew application which will then be used to install binchunker, which performs the actual file conversion.

In order to install Homebrew, you need to be running Mac OS X 10.10 or later and have Command Line Tools installed on the machine. You should also have at least a rudimentary knowledge of the command line.

You can now use Homebrew to install binchunker.

Installing binchunker with one command:

The general format for converting files .bin and .cue files into an .iso file is:

You can then mount the .iso file and use it as you would any other disk image.

Hopefully, we have demonstrated the benefits that you can achieve by creating disk images on your Mac system. They are a way to make precision backups of your storage devices and present a method of data recovery that preserves a failing drive by limiting the need to access it during a restore. It’s definitely worth your time to see how they can better protect your data.