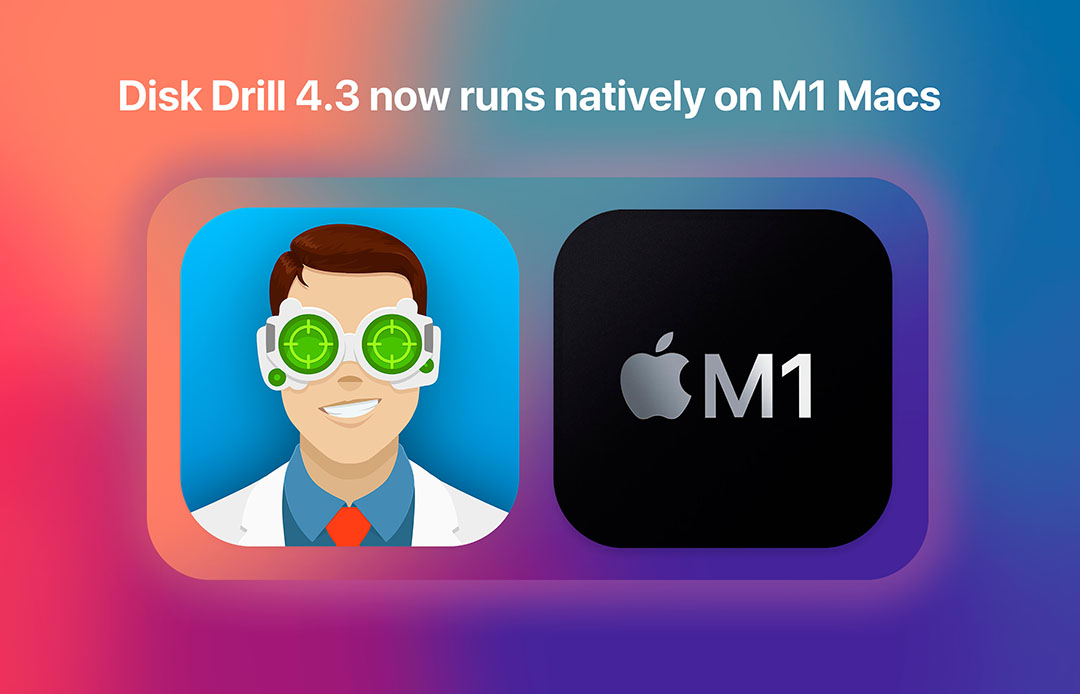 Apple devices, namely Macs, iPhones, iPads, Watch, HomePod and Apple TV, are among the most secure on the planet. The recent additions to almost every Apple’s device family is protected with Secure Enclave, a coprocessor for additional data encryption.

Every year, while announcing new products, Apple Corporation introduces additional features that ensure increased safety and customer satisfaction on the one hand, and new crypto challenges for software developers, like CleverFiles, who have to deal with data on the lowest abstraction level.

In this article, we are trying to explain how tightened data security and additional levels of encryption affect user files on Macs, and how our brainchild product, Disk Drill, one of the most advanced Mac data recovery apps in the world, evolves while improving its recovery success rates without compromising on user and data safety overall.

As Disk Drill works with your storage devices on the lowest system levels, in order to retrieve deleted data it has to be compatible with all of these security technologies from the ground up. Every year It takes many weeks (and even months) for our developers to transcode the most complicated parts of Disk Drill’s core in order to support the new technologies and deliver secure and reliable data recovery on new Macs.

‘’Our team is developing system-level utilities for Macs since 2009. Every year our entire team (along with thousands others) tunes in Apple’s WWDC from all parts of the world to find out about the new technologies and hardware. Every year we start new development sprints to adapt our products to the newly introduced requirements and standards, making them better for Mac users around the globe. We’ve been improving Disk Drill for many years to ensure the maximum possible recovery rates, and we are so proud to be the first to announce Disk Drill 4.3 fully support scanning (including Deep Scan) and recovery from system partitions on Macs powered by Apple M1 chips.’’

Read on to find out why it is such an important leap for us as a company, and for all our users.

Recovering lost data from external drives is generally “simpler” than scanning and restoring deleted files from internal or system drives on Macs.

This is easily explained by the level of encryption macOS maintains to ensure its strongholds, including the M1 layer on the newest Mac computers. Still, if you are used to keeping your data on the main system drive (the default Documents, Downloads, Applications and other familiar user folders are located there), its accidental deletion is no fun at all. Luckily Disk Drill is finally capable of finding and undeleting that data for you on M1 Macs.

To achieve that level of decryption and access, Disk Drill deploys its own kernel extension (known as kext). After a number of system-level and administrator’s approvals, this enables Disk Drill to securely search for lost data in all user folders and system locations on the internal drives in macOS Big Sur.

This makes Disk Drill stand out in comparison to other data recovery apps for macOS. Disk Drill is the first app in the world to run a native Deep Scan of system drives on Macs powered by Apple’s M1 chips. Thus, for instance, today Disk Drill is the only available solution to recover deleted user folders on M1 Macs, unlike other data recovery apps that can’t access and scan system drives at all. Unlike its competitors that run through a compatibility layer of Rosetta, Disk Drill is faster, more efficient, and fully compatible with the newest M1 chips. The same refers to SIP-protected external storage devices connected to M1 Macs — Disk Drill 4.3 is the only app out there that can scan and recover from them.

Data Recovery Apps and Where They Stand on M1 Support

⚠️ NB: Apple may shut down Rosetta completely in some regions, effectively prohibiting apps that are not ready to run natively on M1 Macs there.

A Grain of Salt with a Grain of Hope

No secret that all modern Macs run on faster SSD drives. This also means that TRIM is enabled by default. TRIM is a set of solid-state drive erasure optimization commands that immediately eradicates all traces of deleted data from SSD storage devices the moment the file deletion is executed.

Yes, you are reading it right, if you remove a file from your internal SSD drive on a Mac, the chances to recover it even with the top-class software like Disk Drill are not very high. However, our own and our users’ tests prove the success rate is actually higher than usually expected, especially if you act fast after identifying a data loss.

the anxiety. i did this the LAST day of work before the holidays with a folder with 700+ of my most used files and almost bawled…but @Cleverfiles was able to get them back for me.

all the virtual hugs your way because 😰😭

In fact, when scanning internal drives, Disk Drill not only searches for deleted data on drive’s sectors marked as empty/available, where the deleted data can still be extracted from, but also dives deep into hidden and backup system folders by running Allocate Existing Data and Time Machine snapshot analysis algorithms, thus uncovering lost files from locations not accessible via regular Finder search. 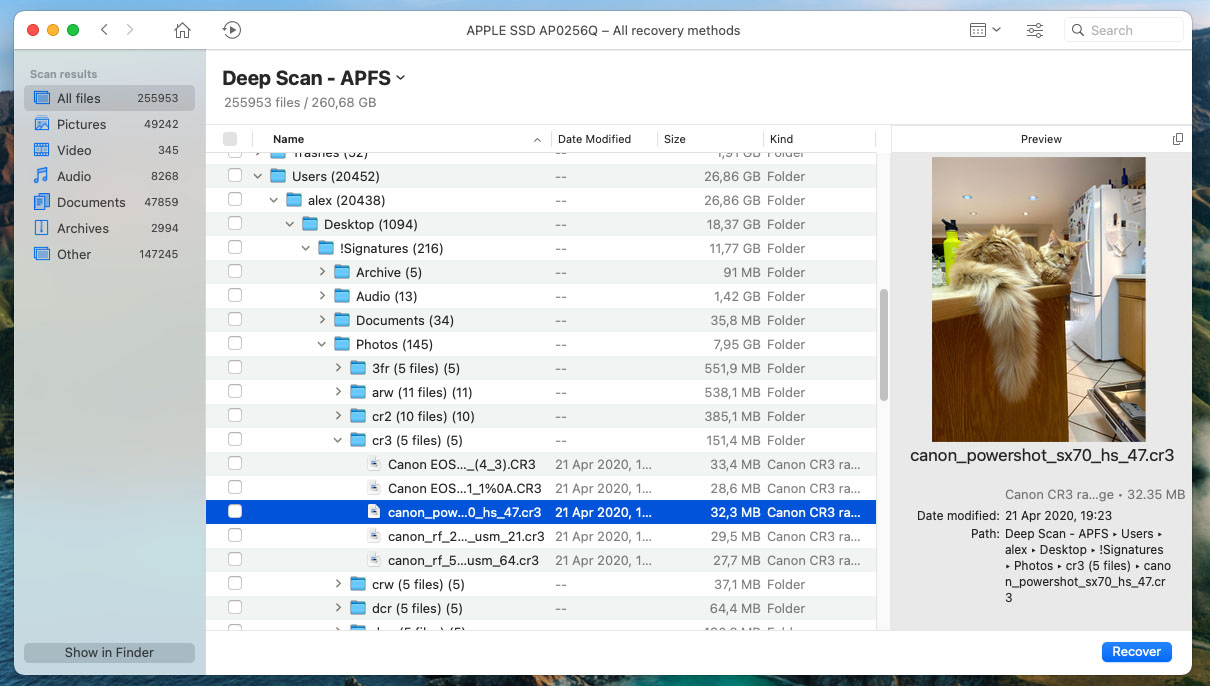 Also, the cases when TRIM system calls are delayed, or the deleted data was still accessible for Disk Drill’s Deep Scan, even after some prolonged periods of time after its deletion from SSD drives, are not unheard of. Remember, Disk Drill is absolutely free to try to verify your data recoverability.

It’s worth noting though, that theoretically, TRIM prolongs your drive’s lifespan. And external SSD drives do not have TRIM enabled by default, but it may be enabled manually by some Mac users.

We are eagerly waiting to experience the coming Apple’s M1X chips. And that means, the custom Apple-branded CPUs are here to stay! Making Disk Drill M1-compatible, and natively running on all new Macs, we are leaping into the future together with our users and for our users. The latest macOS 11 Betas are also addressing a number of issues within Kernel Debug Kit that hopefully will be resolved by Apple soon to allow extensive testing of crucial system-level components of apps like Disk Drill in boot mode.

That said, we are 200% committed to delivering new versions of Disk Drill for Mac to our respected community of professional and home users, building on top of and thanks to the new technologies provided by Apple, ensuring the best quality of our data and recovery rates regardless of what you are recovering from.

To all fellow developers, a deeper explanation of the data decoding challenges faced by apps like Disk Drill can be found in the recently released Apple Platform Security Guide. It’s a foundational read, the must for all data security experts.