The PS File Format and Where to Use It 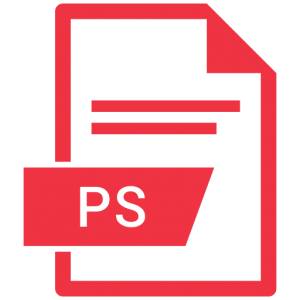 Created by John Warnock, Chuck Geschke, Doug Brotz, Ed Taft, and Bill Paxton, PostScript is a programming language used to describe document layout. It plays a vital role in electronic publishing as well as desktop publishing. The first version of PostScript was released in 1984. This version is now commonly known as PostScript Level 1. Post Script Level 2 was introduced in 1991, and PostScript Level 3 in 1997, with each level adding extra features.

The main advantage of PostScript, when compared to previous printing technologies such as dot matrix printers and vector graphic printing, is the possibility to use a single language to control any printer on the market.

What Is a PS File?

Just like with other programming languages, PostScript source files are human-readable text files that can be opened using any plain text editor. Despite this, files with the .PS file extension are seldom produced by humans. Instead, there are several applications that can generate a PS file from other file formats.

How to Open PS Files?

To directly open the PS file format on a PC or Mac computer, you need a PostScript interpreter. If you are familiar with programming languages such as JavaScript or Python, the concept of interpreter should be already familiar to you. Simply put, the PostScript interpreter translates the plain text source document and outputs it either on a display or as a printed page.

Available on Windows and Linux, Ghostscript is the most popular PostScript interpreter available. It’s safe to say that the software has been created by programmers for programmers, so many people use it in conjunction with SumatraPDF, which is a lightweight PDF reader with support for displaying PostScript documents using Ghostscript. Aside from the support for the PS file extension, SumatraPDF can also open PDF, ePub, MOBI, CHM, XPS, DjVu, CBZ, and CBR file formats.

Windows and Linux users can also use Evince, a document viewer for multiple document formats, including the PS file format. Evince is part of the GNOME project, which develops a desktop environment that is composed entirely of free and open-source software. Evince supports PDF, Postscript, djvu, tiff, dvi, XPS, SyncTex support with gedit, and various comics book file formats.

How to Recover Deleted PS Files?

Have you ever wondered how to repair PS files? You are not alone. When dealing with data loss and file recovery, you can either choose the hard way, which often involves obscure command line tools and lengthy manuals, or you can choose the easy way, which involves Disk Drill, a popular data recovery solution for Microsoft windows and Mac OS X.

Disk Drill makes PS data recovery as simple as it can be. Just fire up the application, select any storage device you want, and wait for Disk Drill to perform deep file recovery analysis of your storage device. After that, you can simply select which files you would like to recover back.