APFS (Apple File System) is a new file system for Apple-compatible storage devices such as hard drives, flash drives and other removable storage. APFS, also referred to as APFS MacOS, will work on most MacOS, iOS, tvOS and even watchOS devices and offer vastly improved performance over existing technology such as HFS and HFS+. 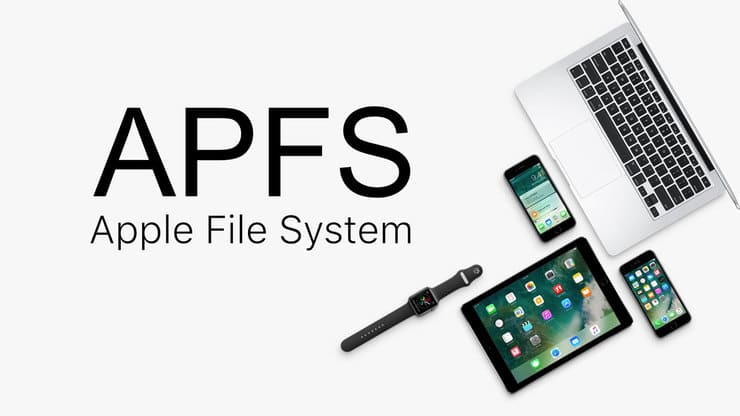 A file system is essentially a “language” which allows your computer to categorize and store information on a hard disk. Depending on the design and functionality of this language (file system) it is possible to obtain superior performance, data recovery and functionality. APFS is designed to replace HFS and HFS+ which are now thirty years old.

APFS vs HFS, Advantages to APFS

HFS was originally designed in the mid 80’s and was specifically designed for technologies of the time, primarily spinning hard disks. Modern computers rarely make use of spinning hard disks and SSD (Solid State Drives) are becoming more and more common. In addition portable media such as memory cards and USB drives, collectively referred to as flash memory, are now common and function similarly to SSD hard drives.

APFS calculates data size and free space in a new manner which means developers are already noticing slightly more free space on their APFS disks versus their old HFS+ formatted disks. APFS is also capable of sharing information between files which makes copying data far superior to HFS and HFS+. While no official details exist on the exact speed comparison between APFS and older file systems it has been shown in some cases that APFS is capable of copying files 17x faster than HFS+, even on removable media.

APFS also has a new way of viewing free space on MacOS. In the past partitions were fixed to a single disk and increasing or decreasing partition sizes was complicated and sometimes even risky in terms of data loss. APFS introduces a new methodology for handling partitions (by forming containers) and introduces a feature called Space Sharing. This feature makes it possible to span multiple partitions or file systems across physical storage devices and make resizing partitions on the fly painless and safe.

Most programs/applications will work properly with APFS “out of the box”. Changing a file system is rarely an issue for applications as this is a core operating system functionality and not something each individual program has to deal with. Some exceptions do exist to this rule and some programs especially in the file recovery sector may not be able to scan or detect APFS drives.

Disk Drill plans to announce full APFS support in the nearest future. At this time Disk Drill is capable of APFS file recovery via our highly advanced “Deep Scan” feature which detects hundreds of file types on any file system including APFS, HFS, HFS+ and many more.

Quick Scan functionality is planned to be integrated into Disk Drill for APFS file systems in the future and will offer powerful and quick file recovery on APFS formatted file systems and devices. APFS as a file system introduces multiple new features which will make accurate file recovery even easier than with prior file systems such as HFS/HFS+ and Disk Drill plans to leverage these technologies to their maximum.

How to Obtain APFS

There is good news: you don’t really have to do anything. If you are running an iOS device and have iOS 10.3+ you already have APFS, no action is required on your end. macOS users will need to wait, at the time of writing this article the macOS release is only available to developers and preview users.

Apple has promised to introduce support in future updates, no action will be required. Once your MacOS updates you should be automatically upgraded to the new APFS. Disk Drill will be able to scan your APFS drive for files in Deep Scan mode. We are also gearing up here at CleverFiles to announce full APFS support with native Quick Scan capability as soon as we can.