Disk Drill 2 Is a Hit

We’ve been getting a lot of feedback on Disk Drill 2 since its launch in April, and it has been overwhelmingly positive. Our user-friendly interface has been helping Mac users all over the world recover their precious data.

Here’s a roundup of some recent reviews:

Review: Disk Drill PRO for Mac (Techerator) – Donny Yankellow at Techorator gives a nice overview of Disk Drill 2 and states: “I was really impressed with the amount of files DiskDrill was able to recover…. I highly recommend making Disk Drill Pro a part of your utility apps for your Mac.” 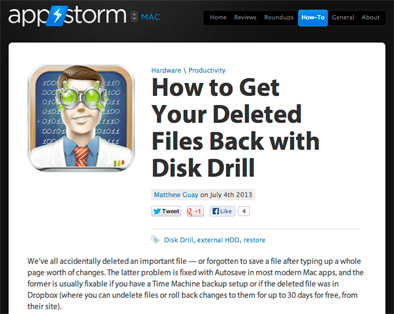 How to Get Your Deleted Files Back with Disk Drill (AppStorm) – Matthew Guay at AppStorm gives a great real-life example of using Disk Drill, after he crashed his backup drive with vital photos and videos, including his wedding photos. Disk Drill came through with flying colors, recovering his wedding photos and almost all of his other files with the exception of a few large ISO and DMG files. His conclusion? “Odds are, you’ll need something like this too, sometime. So bookmark this article, and when you need to restore files from an apparently empty disk, you’ll know how. Disk Drill Pro is rather pricey at $89, but it’s invaluable if you’ve got to recover a ton of files.”

Files Disappeared? Dig ‘Em Up With Disk Drill (NoodleMac) – Ron McElfresh at NoodleMac has this to say: “Thankfully, there are a few Mac utilities that let you dig into the Mac’s HDD or SSD to recover files that normally are not even visible to recover. High on my list of the apps I seldom use but keep handy is Disk Drill…”
If you prefer to read reviews in other languages, we’ve got those too!

So why not give Disk Drill a try and see what recovery magic we can work for you? Download the free Disk Drill Basic today.