All about the Most Popular File Format – MOV

What is MOV File Format? 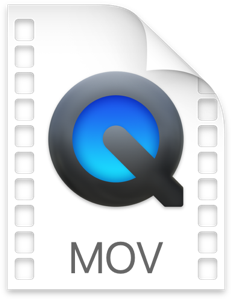 A MOV file contains one or more tracks. Each track contains a specific type of data: audio, video, effect or text (for example: subtitles). Data in each tract can be in the form of a digitally-encoded media stream, or as a reference to a file containing the media stream. Tracks are structured with objects called Atoms, which are organized in a hierarchical manner. This capacity of containing data in an external file, makes MOV files suitable for editing, as it is not necessary to rewrite all the data.

This file format is object oriented, giving the format the capacity to expand using new object types. Objects are also easily parsed due to its hierarchical organization.

Atoms are the basic data unit of MOV files. They act as containers of information. Each atom has size and type fields. If it also has a version field and a flags field, it is called a full atom. An atom is identical to a box, as described in the ISO standard for MPEG-4 and Motion JPEG-2000. Each atom is identified by a 32-bit unsigned integer, usually interpreted as a four-character ASCII code.

How to Recover Deleted MOV Files

It is quite easy to recover unintentionally deleted MOV files. Disk Drill is a data recovery app that can recover MOV files from a variety of digital devices, such as internal and external hard drives, USB flash drives, iPhones, memory cards, and several more. The app is available for free!

Your MOV file recovery is done!

How to Use Image Files to Recover MOV Files

Image files are bit-by-bit copies of digital drives. They can be created using Disk Drill, by accessing the respective option from the “Extras” menu available next to each detected drive. Image copies are useful for MOV file recovery and for backup purposes.

In the case of MOV recovery, working on image files is an advised practice, as it reduces the risk of damaging the original source. In addition, the process can be repeated on extra copies. For these reasons Digital Forensic practitioners usually work on image copies.

Image files can also be used for backups, with the added advantage of also storing deleted files not yet overwritten by the operating system. On the downside, a backup using an image copy may result in unnecessary used space, as the resulting size will be the same as the full size of the original source.