Mac vs. PC: Here are the Real Differences

Mac vs. PC: Pros and Cons

The endless debate: why PC is better than Mac and why Mac is better than PC. You’ve seen the funny YouTube videos, read all the memes, and now it’s time to go over some real reasons why you may want to choose one over the other.

Difference Between Mac and PC Computers

Mac computers are typically associated with creatives working as graphic designers or marketing experts, while PCs are seen as rather boring machines for white-collar office workers who spend the vast majority of their time steering at spreadsheets and PowerPoint presentations.

It’s true that PCs used to be quite ugly and uninspired. This has changed a lot over the past few years, with companies such as Dell or Microsoft releasing stunning laptops and innovative all-in-one PC computers, such as the Microsoft Surface Studio. Windows has also got a lot batter since the days of Windows XP, and Windows 10 is widely considered to be the best operating system Microsoft has ever released.

Still, there’s something to be said about Apple computers. Take apart any MacBook, and you discover a work of art. Every component has its place, and every design element contributes in a certain way to fulfill the vision of Apple designers. What’s more, Apple understands that users rate computers, just like other tools, based on how they feel. A high-quality keyboard, smooth touchpad, and high-resolution Retina display add a lot of value to already fantastic computers.

All this control over how Apple computers look, feel, and perform isn’t without its downsides. If you’re switching from PC to Mac and would like to build your own custom Mac desktop computer, you should abandon the idea immediately. Apple users get to select from a handful of models, and that’s it. Selecting a CPU, upgrading RAM, installing a water-cooling system – those things are possible only with PC computers.

In the whole “Mac vs PC” debate, one thing is for sure: Mac computers are more secure. Because there are so many Windows computers out there, rational attackers understand that they can make much more money and damage if they focus on the most used operating system, Windows.

But don’t assume that you can completely forget about malware and hackers just because you’re using a Mac computer. Your Mac computer can still become infected, resulting in a massive loss of data. When that happens, your best bet is Disk Drill, the most popular data recovery suite for Mac OS X.

Disk Drill can help you recover over 200 file formats from all popular storage devices, including Android and iOS smartphones and tablets. It also comes with free disk tools, including S.M.A.R.T. disk monitoring, cleanup, duplicate finder, data protection, and data backup. 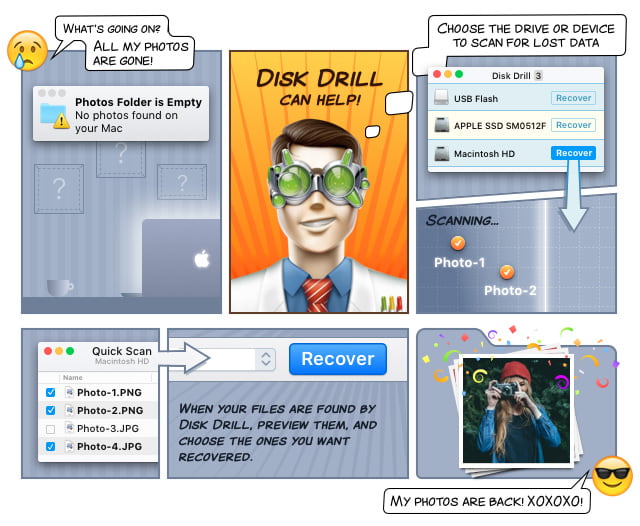 As you can see, both Mac and PC computers have their pros and cons. Unless you have a specific reason to avoid either one of them, you shouldn’t waste any time and energy on pointless internet arguments. Use any operating system and computer that you like and don’t be afraid to change your mind in the future.